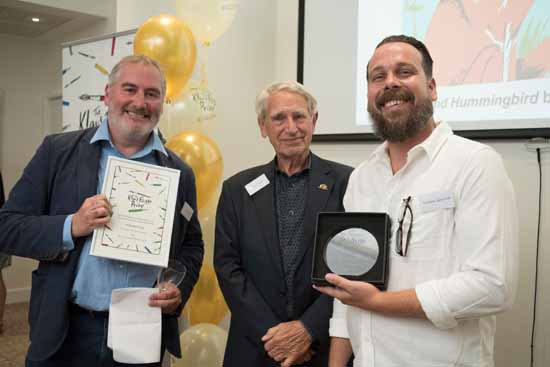 When Klaus set up Andersen Press in 1976, there were just four books on the list, one of which was Goldilocks and the Three Bears, by a debut illustrator called Tony Ross. Forty years on, Klaus is still working with Tony. Other illustrators Klaus championed and continues to work with include David McKee, Satoshi Kitamura, Michael Foreman, Susan Varley, Chris Riddell, Ruth Brown and David Lucas. All are now stars of the book world, but the initial response wasn’t always positive: David McKee’s I Hate My Teddy Bear was attacked by critics in the early 1980s as ‘difficult’, `surreal’ and ‘indulgent’. Speaking at the time, Klaus said `Sometimes you simply have to do a book. If you believe in an artist you respect his feelings on the matter and believe in what he is doing.’

The inaugural Klaus Flugge Prize was awarded to Nicholas John Frith for Hector and Hummingbird, published by Alison Green Books. Frith names mid-century illustrators Dahlov Ipcar and Roger Duvoisin as important influences and, like them, uses the demanding technique of preseparation. Submissions are now invited for the 2017 Klaus Flugge Prize, which includes another Klaus Flugge protégé Axel Scheffler on the judging panel.

Find out more information about the prize here.