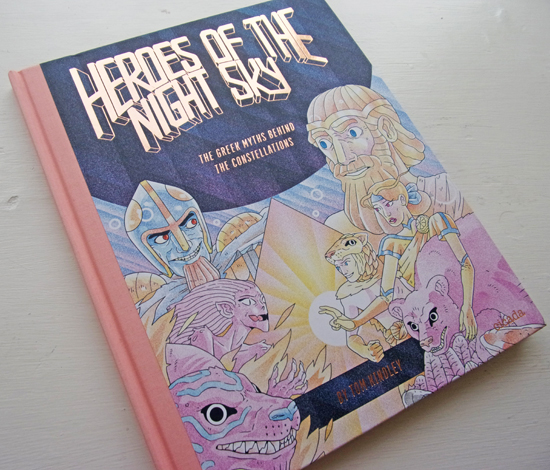 The popularity in recent years of the Book Fair in all its forms; Graphic Art, Art Book, Comix, has greatly benefitted young, unknown graphic artists wanting to show their work, meet people, create a network; to make all the contacts necessary to provide a living from illustration. As the occasions become rarer to physically meet up with clients, public and contemporaries, so the making of runs of fanzines, comics, prints, short graphic novels and distribution of them in Book Fairs has come to replace the hauling of portfolios from publisher to publisher – the standard way before the internet made it all so effortless. It is a very effective means of meeting the people you work with or hope to, enjoyed by both clients and artists, and through the sharing of ideas new collaborations frequently begin.

Tom Kindley has been doing just that. Since graduating in Illustration at Edinburgh University in 2013 he has been doing the rounds and selling his fanzines, comics and concertina books at various book fairs. Commissions from independent publishers have led on from this, but the most important opportunity for him so far came at a Book fair when he met Ziggy from Cicada Books who invited him to put forward some ideas for a book. He decided to combine his longstanding interest in Greek mythology and the natural world, particularly stars, to create Heroes Of The Night Sky, which he describes as his biggest achievement to date. 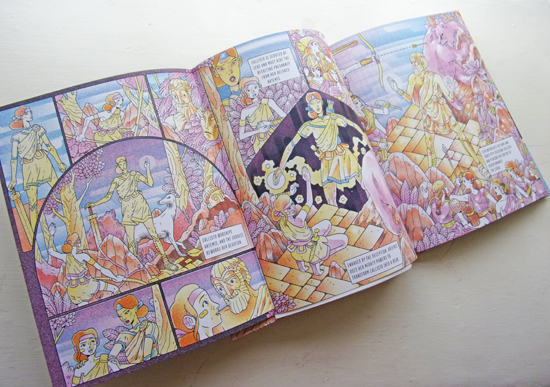 The collaboration was bound to succeed. Cicada Books has specialised in publishing highly illustrated books since 2009 for both adults and children. They focus on emerging talent, beautiful packaging and fresh content, with the aim to produce books that delight and inspire. Tom describes working with Cicada as being struggle free and as they share similar tastes in book design and content they quickly worked out the concept together. When Ziggy first approached Tom she was making a conscious move towards the older boy audience and found that his style lent itself well to comic and action works. He feels however that the subject matter is so poetic that he thinks the book “will transcend its placing in the ‘boys’ market and that it will appeal to anyone with even a passing interest in mythology or the constellations”.

I first looked at the book with my son Elis aged 13 and we felt we were the book’s ideal audience and very capable of giving it a balanced opinion. Elis had done the Greeks at school and knew the tales of the gods off by heart so he was off straightaway opening up the flaps and trying to spot all the different characters. He’s not however the most avid of readers, but when inspired will read non-stop a comic or manga from cover to cover. (He also had Les Mystérieuses Cités d’Or (The Mysterious Cities of Gold) a French-Japanese cartoon series on permanent repeat, as he did with any one of Miyazaki’s animated films. We also had the original version of Godzilla in b+w among the piles of videos.) 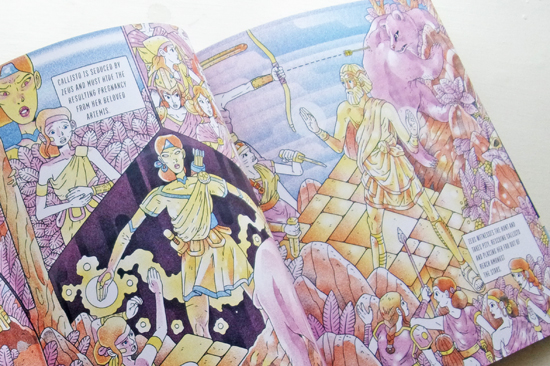 Furthermore, on our summer holidays in the Pyrenees we take sleeping bags into the garden on the nights leading up to the Ascension, le 15 Août, and watch the shooting stars. During the intervals I attempt to point out some of the constellations that my dad had taught us as kids, also on our holiday in deepest France. Likewise for Tom, “as a young boy scout we would go camping in Northumberland’s Cheviot Hills, sleeping in a shepherd’s hut miles from civilisation; at night there wasn’t a light for miles and miles, the only light from a fire, the moon and the stars. I would just lay back and dream, thinking about what stories the stars had to tell”. 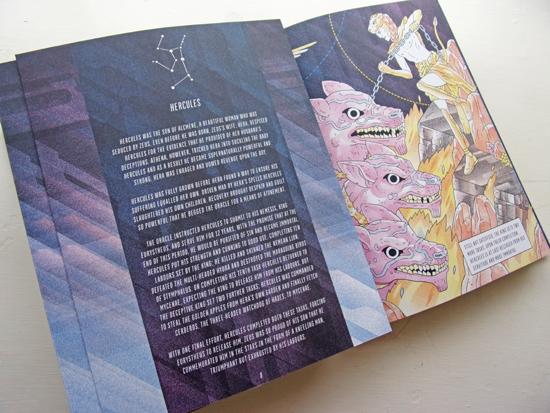 The fact that Elis put the book down after 5 minutes and went back to his iPad says less about this book’s qualities, than it does about the difficulty that books have nowadays to engage with readers who can turn on a screen and gain immediate access to an endless choice of full-on, moving images and sound. I’ll admit that the first read didn’t get me very far into the book, like a new album from when one of your favourite groups that you can’t help feeling disappointed with the first time you play it; the one that ends up becoming your favourite album by that group. I also didn’t quite know what to make of the pictures. Everything was well done, the book was lovely to hold and read, the printing was beautiful, the paper stock well chosen, but with Tom’s pictures I stumbled at first. I wasn’t sure how the illustrations were viewed, as accompaniments to the text or as separate friezes that make a clear break with the classic form of comic books?

Tom explains: “I always wanted the illustrations to work as stand alone pieces. If I’ve succeeded then the viewer’s eye should be drawn across the page as the narrative advances”. The strong stylisation of the characters is almost cartoon-like, but not quite, and the pastel colours and decorative filling of surfaces made me think of Art Deco, West Coast Psychedelia and early 70’s album covers that gave you a fleeting glimpse into sensuous worlds conjured up from a heady mixture of nostalgia, Nature, heroism. 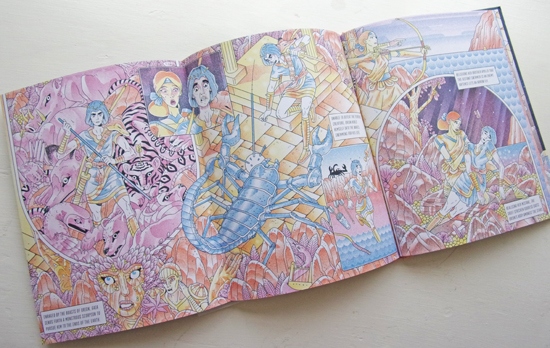 But this wasn’t even half of it. The real source of inspiration for this book was something I owe to Tom for making me aware of. He describes how he “was brought up on a diet of Ray Harryhausen movies… a lot of which are inspired by or stolen from Greek mythology. Jason and the Argonauts and The Clash of the Titans were biggies too, but one of my favourite films that has informed my style is Princess Mononoke, a gorgeous film based on eastern mythology and it was what I was trying to achieve in terms of tone for my book”. He cites as further influences Jesse Moynihan’s book Forming and the concept album Hadestown by Anaïs Mitchell, that chronicles Orpheus’ journey into the Underworld. 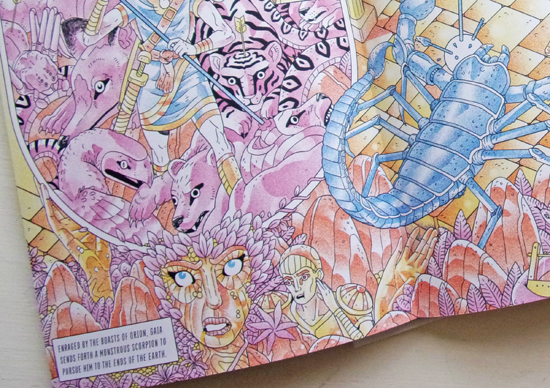 In Ray Harryhausen’s films there is that stiffness and awkwardness of action so typical of stop-animation at that time. A world that existed before colour TV became the norm; Bill and Ben, Pogles’ Wood, Magic Roundabout, children’s programmes that got swept aside by Tiswas and Swap Shop and cartoons on loop. Tom’s figures become figurines, superheroes repeating over and over their roles in the eternal dramas that are played out above us whether we watch or sleep. The dominant pastel-tones of his colour palette mirror the dream-state in which we hold these gods and goddesses, however invisible or forgotten they might have become to us they are present despite our neglect or ignorance and visible when we make the opportunity to seek them out.

Tom’s book needs to be read and reread in order to appreciate its qualities fully because it seems to me that it contains so much subtle detail that is only revealed when you can examine it closely and enter into its strange and magical aura. As having time becomes increasingly a luxury for us in our brim-full lives so will Heroes of the Night Sky gain in value, to discover and rediscover like all good things that are passed on down from generation to generation.