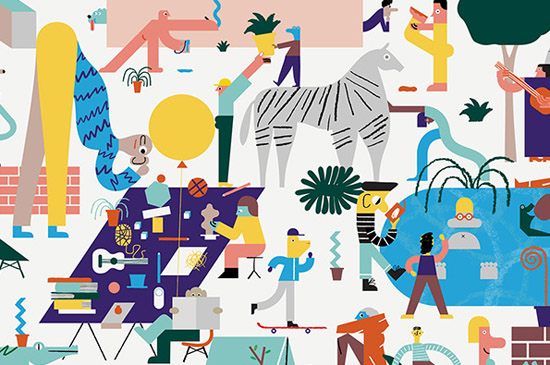 Nous Vous: ‘Drawing on the Same Page’ for The Walker Art Centre

There are many different attitudes towards collectives, to get a more accurate idea of how they function and succeed, Allie Oldfield talks to UK based and overseas collectives asking them how and why they started collaborating.

It’s not uncommon these days to see fresh illustration graduates band together to form their own collectives. After all, illustration is often considered a solitary job and graduation also presents it’s own uncertainties, so it makes sense to keep connected. Here’s what Nous Vous, Spring Magazine and more have to say about getting started:

We formed during Jay’s final year at Leeds College Of Art in 2006. Nic & Will had already graduated at this point from BA Graphic Design at Leeds University. The seed had already been planted during Jay’s study, when he was collaborating with Tom Hudson (now singer of rock band ‘Pulled Apart By Horses’). Collaboration seemed the natural thing to do at the time, pooling resources and gaining the ability to approach more ambitious projects together.

The collective formed out of a shared interest in music, film, literature, art and a similar working ethos. We were friends who sat around drawing together on a Wednesday night at something we called ‘drawing club’. We soon started exhibiting together and things got more serious. Friends bands started to ask us to make record sleeves, flyers and t-shirts for them. Local cafés started asking us to produce designs for them. It all happened quite organically really, we never planned anything – things just fell into place.

We met at art school, liked and enjoyed each others work. Till and Ana were in higher semesters and really influencing my point of view towards illustration and they were influencing each other before. We wanted to work together and make a publication. We were keen on exploring together how to publish a comic or illustration magazine and how to work together on the content. The process was fun and we were happy with the result so we decided to keep on doing things as a group. Besides that we even became closer friends. 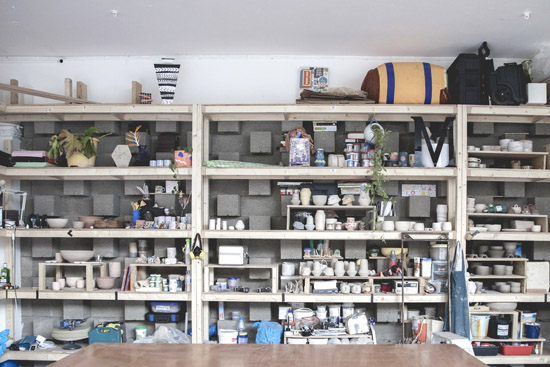 However collaboration can happen at any time, and can often start sporadically with a shared interest, an idea to build a community together and to pool resources. We talked to Clay Club, LOK Zine, Tietan Met Haar and Spring Collective about why they chose to form their collectives later on:

Our collective was formed at the end of 2015. We had all been utilising various clay workshops and classes in London, and came together as we had shared values and interests. Our main aim was to build a working community where we could share skills, provide ourselves with a working space and have communal access to equipment we may not have been able to afford alone. We needed a space in which to hold events and workshops, create a platform for the work of our members and promote and explore the possibilities of working with clay.

We were only really at the formative stages when the space at Hackney Downs Studios came available. While we weren’t sure if we were ready to commit yet, the space was exactly what we were looking for in a studio (ground floor with direct street access, which could double up as a shop front, and already part of a vibrant artist community) We sort of spurred each other on and took the plunge. The whole thing was pretty serendipitous.

It was set up after graduating from University as a means of supporting each other to keep going whilst working other part-time jobs. Peepshow was a way of facilitating self-promotion, sharing clients and expenses and to make the experience of being an Illustrator more fun. Power in numbers as they say. There was never really a grand plan.

At the beginning we were living all together in Bologna, so we were already working on different projects as a collective but not officially. With Lökzine we just gave ourselves a name and focused our friendship and work in a specific direction. Unfortunately we live in four different cities so we mainly use the internet to communicate, but we also use festival and events to meet each other and discuss the most urgent issues. Each member of our collective has a role and we all help and advise one another, but there isn’t a real leader as each member is the head of their own field. 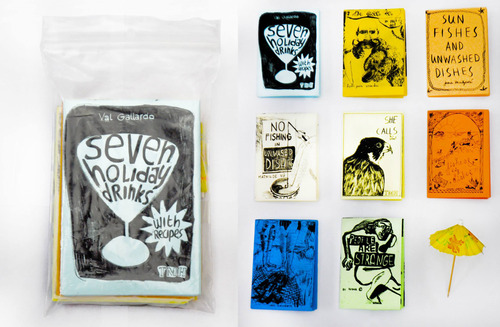 We never really planned on forming a collective. One night somewhere in late 2012 we we’re having a drink with some friends and talking about our childhoods. Mathilde was saying how, when she was a kid, her mom didn’t let her use swear words, but she made up some benign ones of her own, like nichon poilus, which means hairy tits in french (or tieten met haar, in dutch). We all found this very amusing, and someone mentioned how funny it would be to make a fanzine on that theme (of hairy breasts). This would have been thrown on a pile of drunken silly ideas we have every so often, but somehow it still seemed as a good plan the next day.

At the time we were all students at Sint Lucas in Gent, so we invited some friends from the school, as well as some from abroad, and on the malfunctioning offset machine of the school we printed the first edition of our anthology. This wasn’t really a thought-out plan at the time, just a fun thing to do, but it got a bit of attention in Gent (probably ’cause of the name), so even before we decided to make this into a thing, or form a collective, people were already referring to us as tieten met haar. In the end, becoming a collective just sort of happened, and it all grew from there.

In 2004 the German comic scene was mainly dominated my male artists. There was this small group of graduating female students at the University of Applied Science / Illustration Department that wanted to show they were able to tell and draw great stories in their own way. Moreover they wanted to get attention in a market they just started to conquer.

In our next ‘Collectives’ article we discuss the importance of collaboration with Nous Vous, Peep Show and more.

With thanks to Tim Blann for his research and contribution to this article. Special thanks to Paul Paetzel of Biografiktion, Luke Best of Peepshow, Stephanie Wunderlich of Spring Magazine Collective, Math and Jana of Tieten Met Haar, Jay Cover of Nous Vous, Elisa Caroli of LÖK Zine, and Sophie and Emma of Clay Collective for their responses and insight.