Pas de Deux – The Dance of Illustrator and Writer

In these extracts from the full article in Varoom 33 Sarah McIntyre looks behind the creative curtain to discover the nuts and bolts of a successful children’s book collaboration between writer and illustrator. The recently released Tamsin and the Deep by Neill Cameron and Kate Brown is part of a highly successful ongoing collaboration for The Phoenix comic that began with ballet story ‘Emilie’s Turn’.

When I look at publicity and read blogs by people in children’s book publishing, very often they make illustrators take back seats to writers, even when people are discussing lavishly illustrated picture books where the pictures tell most of the story. But people in the comics business tend to be much more aware of the artist’s role in storytelling, and very often the artist will work as illustrator, letterer, inker, colourist and designer all at once.  Publisher David Fickling’s forays into child-friendly comics – first with The DFC and then with The Phoenix comic, both based in Oxford – have introduced many like-minded comic creators to each other and forged friendships resulting in groundbreaking new work. 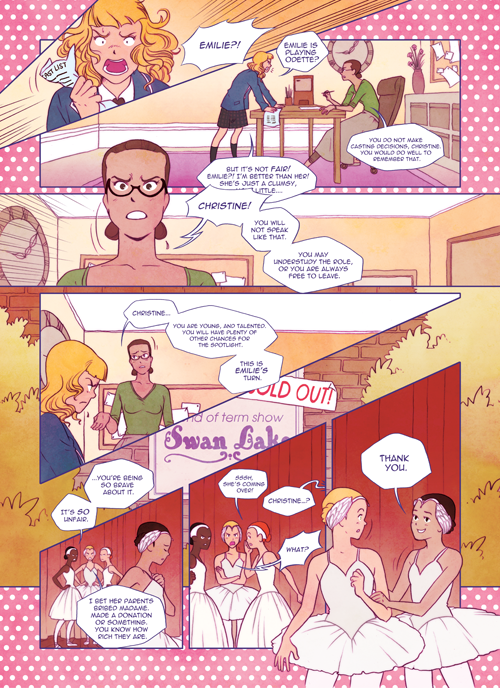 Neill Cameron and Kate Brown are a terrific example of creators who both write, draw and make excellent solo comics, but create something possibly even more magnificent when they come together and play to their strengths. I first spotted their collaborative work in The Phoenix comic, a four-page story about young girls and ballet. I was impressed at Cameron taking on a subject rarely tackled in modern British comics (particularly by a bloke), and the tight story seemed to pull together Brown’s gorgeous artwork and intelligent use of comic panels in a way that was taking her in a new direction.

Sarah McIntyre: Tell us about your first collaboration? I don’t think male comic writers often approach artists with a girls’ ballet story in mind – that was cool, and took on a subject that’s not traditionally dealt with in comic form. Why aren’t there more ballet comics?

Neill Cameron: I think there used to be more ballet comics – back in the 1970s when we had a wider range of comics for children generally. And indeed, in other countries there still are plenty of ballet comics. We in the UK had for a while, I think, a sadly shrinking view of what comics could be – broadly speaking, either male-dominated action-y sci-fi superhero type stuff, or wacky cartoony humour. Both of which I love, don’t get me wrong, but I’m firmly of the belief that comics can and should be anything – in terms of both subject matter and stylistic approach – and therefore that we shouldn’t be limiting ourselves.  That ballet story – Emilie’s Turn – was something we did when The Phoenix was still quite new, and I think for me at least, it was kind of an experiment, just to say: children’s comics can be this, too. We should be brave enough to take our audience to new places, to experience different things. I absolutely loved that story, it’s one of the things I’m proudest of. I would have loved to do more ballet comics but, honestly, I think I kind of put everything I had into those four pages. 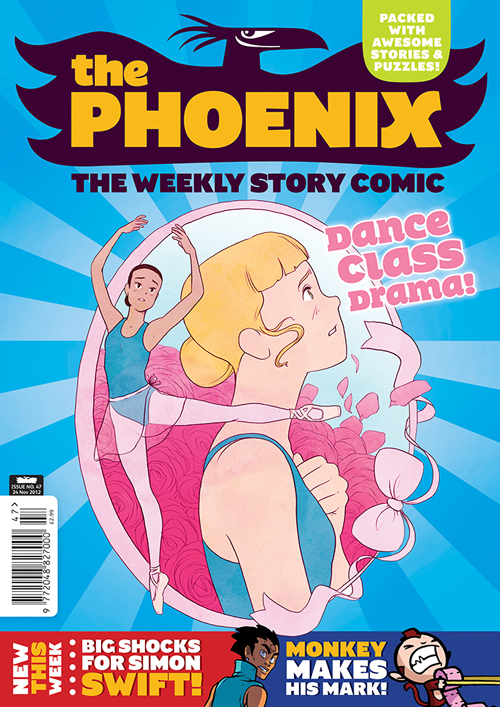 Neill clearly states that their new comic book Tamsin and the Deep is ‘by’ both of them, and because he knows what goes into making pictures, he’s able to credit Kate knowledgeably as co-author for her huge role in their collaboration. And it’s interesting that while Kate can do flashy visuals, what’s most important to them both is the clarity of the story and how she can go about communicating that with her images and layouts. Their choice to set Tamsin and the Deep and its upcoming sequel in modern-day Cornwall feels as fresh and exciting as the story’s sea air.

SM: You’ve both written and illustrated your own comics. How did Tamsin and the Deep benefit from teaming up?

NC: It’s wonderful for me, writing things for someone else to draw, because it means I get to play to someone else’s strengths. Kate is just incredible at drawing character and emotion and atmosphere and magic and mystery, and so it encourages me to really explore all those things. Rather than just have two robots hitting each other, which is what I tend to do when left to my own devices. 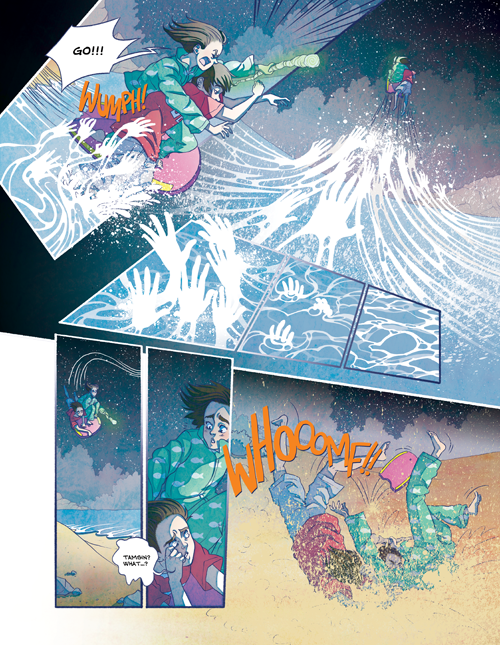 Tamsin and the Deep, Neill Cameron and Kate Brown, The Phoenix

SM: Kate is particularly good at painting clouds and water – natural elements – and they play active roles in the visual storytelling. How did you get so good at this, what are your influences, have you kept a sketchbook, did you grow up by the sea?

Kate Brown: I just happened to keep on making things/working on things that were either set in, on or by the sea, so I kind of had no choice, haha. I enjoy that the Tamsin series pushes me to depict naturalistic landscapes though, which was something I was lacking in a lot. I think I’m getting better at it… though I do find it tough to depict natural stuff with the linestyle I have, to be honest.

SM: Does everyone get equal credit for their work?

NC: I hope so, yeah! In most cases, anyway. I think the Comics World, so to speak, is pretty good at recognising the importance of artists, and crediting and celebrating their work accordingly. One weird thing we’ve found with Tamsin is that, as we push out a bit from comics and into the Children’s Book World, we will occasionally find a review or listing that can treat the artwork as in some way secondary. I don’t know if that’s just the world they’re coming from, the kind of vocabulary they’re used to using, or what. But I think we’re very clear –  this is not a “Book By Neill Cameron (Illustrated by Kate Brown)”. This is a “Book By Neill Cameron & Kate Brown – co-created, co-authored, co-told.”

SM: How do you split the pay?

NC: We split the page rate 20/80; on the basis that writing a comic is one job, whereas what Kate does on Tamsin is (at least) four – roughs, linework, colouring and lettering. That seemed like a broadly fair way of recognising the respective amounts of time that go into actually producing the thing. In terms of owning the rights and royalties etc, going forward, we split that stuff 50/50 because, as I say, it is a jointly made, co-authored thing. 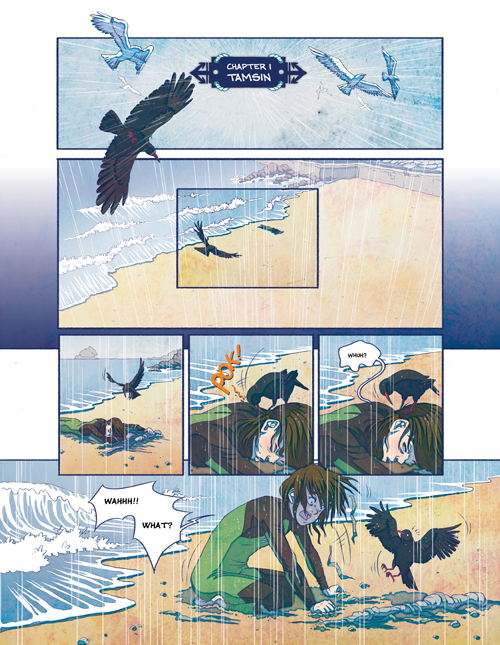 Tamsin and the Deep, Neill Cameron and Kate Brown, The Phoenix

SM: Kate is a master of textures, but often comics pay so badly that it’s just not worth it to comic artists to spend time doing more than flat colours, possibly with a bit of shading. Kate’s comics really stand out because of their rich textures and colour palette. How do you choose your colour palettes?

KB: Lol, It’s funny because I had to cut back with these things in the second book. I basically couldn’t keep up with the heavy colouring and effects and something had to give; there was only really the option of cutting down the colouring-in complexity because I couldn’t cut down on the base artwork. I actually didn’t like the final result of the colouring in the first book much anyways, so it was sort of freeing in many ways. At the moment, I’m sort of broadly interested in simplifying aspects of my work to enhance clarity and this was a step in that direction. I’m particularly interested in clarity for comics going to younger readers, as I’m aware this may be their first ever comic, and it’s got to be “easy” to read. Overdrawing and overcolouring and any generic messing-up is not something I really want to be pissing about with – my layouts are far simpler as well, compared to my personal work for instance. I want to be clear I’m not trying to dumb things down, I just want them to be easy to read for anyone. I still make mistakes – putting a lot of material into four pages is challenging.

Oh hang on, you asked about colour palettes… uhm… well, I just sort of mess about until it looks okay, really. I’m afraid I don’t do anything special. Which means it doesn’t always work very well, or print very well.

SM: What’s it like working for The Phoenix comic? Is there work available for other writers and illustrators? What are they looking for?

NC: Just speaking for myself, it’s been fantastic. Between Tamsin and Mega Robo Bros, the strip I write and draw myself, I couldn’t really ask for a better situation. I’m kept as busy as I could hope to be, making the exact comics I want to make, and I love that they’re our thing. A lot of jobs in comics, you’re kind of working on other people’s characters, and I love that we get to make our own things and experiment and learn and explore.

The full article is in Varoom 33 the Collaborators issue, which is available here.