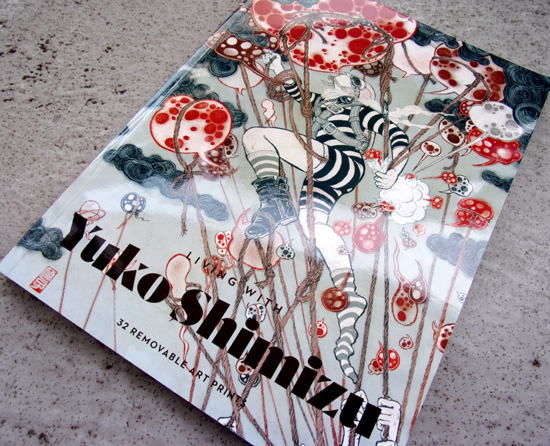 Yuko Shimizu’s characters inhabit a variety of dynamic compositions; dangling, jumping or entangled up with others while sporting her familiar stripy costumes, and this feeling of movement is one of her strengths. Although professing to be afraid of water in one of the comments which accompany each image, Shimizu is remarkably adept at representing the swirl of a river or the foaming of waves, admitting that although having severe hydrophobia, ‘I am deeply fascinated by water’. Characters also dangle from plaited hair, attempt to subdue a bear and engage in deep sea diving, bringing intrigue and a sense of playfulness to the diverse images (which also contain flowers and lively birds). The girls and women depicted in Living with Yuko Shimizu look strong and purposeful, tackling curious creatures or pumping up an inflatable swimming pool – another appealing element of these images. 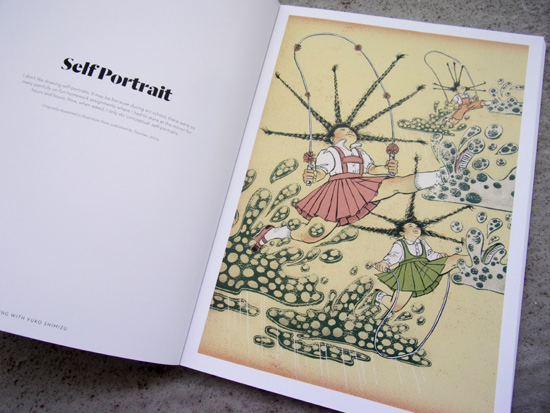 Shimizu is a very successful illustrator based in New York, who brings elements of her Japanese heritage to her artwork, forging a unique approach which she talks about in the short texts on the reverse of each full page image. This insight lifts the book from being a compendium of images, and adds to the reader’s enjoyment and appreciation of the artwork. As a Japanese illustrator working in the US market she says, ‘I am often asked to illustrate articles relating to Japan. I often use iconic and recognisable Japanese references, including old Japanese artwork’, and examples of these commissions are included here.

‘If I had a choice,’ says Shimizu, ‘I would do all my drawings in black and white’, and while the line drawings included here are remarkably effective, the viewer would be missing out on the sophisticated palette that Shimizu uses for her artwork. A limited selection of colours for each picture brings an effective depth to the images, complimenting the confident line work. Shimizu created a cover for issue 13 of Varoom magazine, with stripy legged characters echoing the Going Places theme of that issue, striding along under a spiny sea shell. 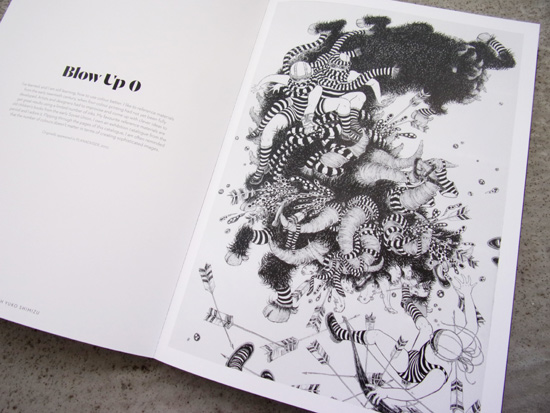 All the images can be removed from the book for display, and I’m already planning a rotating framed Yuko Shimizu mini exhibition in my front room using all my favourites. A lovely look into Shimizu’s inventive, inquisitive artwork.

I asked Shimizu some questions inspired by the images in this book:

Your characters usually inhabit an environment, sometimes an unusual one – do you always want the situations you depict to feel plausible?

When I was still in graduate school, I was getting good at drawing figures, but not good enough to put them in environment. One of my professors pointed out that if I don’t work on my environment skills, I will have no career in illustration. I had to get to work.

Because I wasn’t good with anything that is remotely environment related, I started from putting them in snow and open water. Obvious easiest choice. Then once I got used to drawing them, I proceeded to creating imaginary environment, so I didn’t have to deal with any of the real situation problems, like drawing cars that look like they would move, and buildings that look like they can actually stand.

After many years of working professionally, now I can draw pretty much anything. Yes, I still have preference, what I like to draw and what I don’t like to draw. But I can pretty much draw anything. 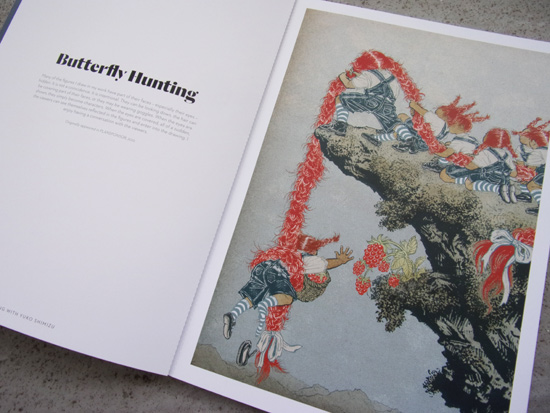 There’s a sense of female empowerment running through your work – is this conscious?

Yuko Shimizu: Probably not so much as for the images that are in this book, but, in general, yes, definitely.

I don’t know how it is now, but when I was a kid in Japan, there were a lot of TV shows, mainly animated series, with strong independent female main characters whom girls can relate. They usually have super power (they are good witches), and living among the regular people hiding their power but they are there to help them. I didn’t even think of what attracted me so much until way later on in my life when I was able to understand the message of empowerment for girls. To think about it, it is very interesting, because Japan was, and Japan still is, a lot behind when it comes to sexism. I also read a lot of books as a kid with strong girl characters, like Pippi Long Stockings.

Childhood experience tend to never leave you even decades later.

Women of the world still need those uplifting characters. So, if I can be of any help, I would be more than happy to do it through my drawings.

You have a very strong feeling for composition, very dynamic – did that come naturally?

Thank you for complimenting on my compositions. Composition is something that is one of the most important aspect of creating images. People often focus on my drawings, but actually, composition for me is even more important than the actual drawing. I try, not always succeed but at least try, to treat composition as if I am making an abstract painting. If the composition doesn’t work, the image doesn’t work for me.

Often people are surprised to hear this, but I don’t look at (other) illustrations so much. (I do look at them to have general understanding on what is happening in the industry.) I look at design, a lot of design of any kind. Book design, posters, products…. Great shapes and forms are what makes me excited about art.

I don’t know if things come naturally or not. But what I can say is I am really really into compositions, and I have pretty much always been. 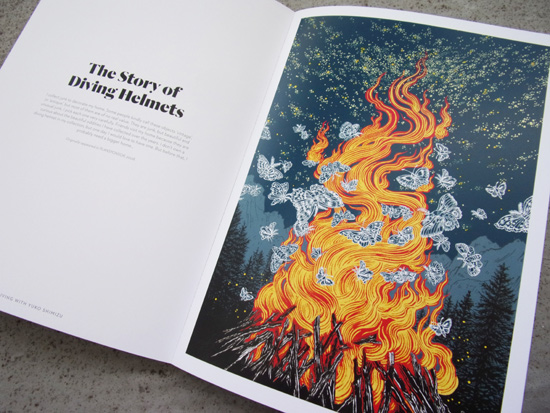 The interesting viewpoints and angles you depict have clearly inspired a number of other illustrators – how do you feel about that?

It’s sort of a weird feeling,, knowing that I have worked long enough there are people who want to copy, or at least heavily influenced by, my work. It is not so much I get annoyed or flattered. Neither. I just get weirded out. Though I don’t teach what I do to my students, it is natural students do go through certain influenced-by-instructor stages, I have seen this happening to my direct students, and I understand that phase. It’s a weird feeling when I see that in random strangers.

Every one of us pretty much started out from getting heavily influenced by artists we loved. So, I just look at them as a phase before their finding their own voices.

It is, in a way, a good stimulation for me. I have to keep reinventing myself, what I do, what I draw. Where I seek and draw inspirations from. What I need to learn… at the end of the day, being an artist is about keep reaching for the next level.

Living With Yuko Shimizu by ROADS publishing is out April 6, £11.99, available here