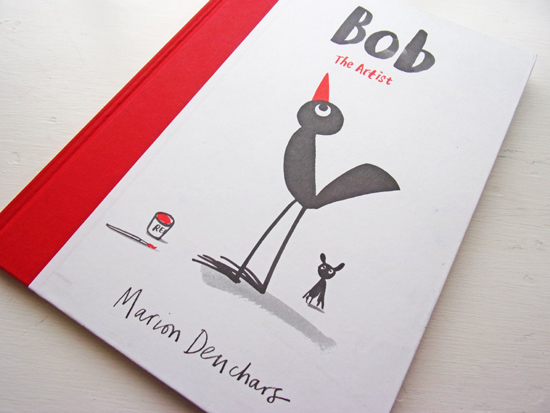 Bob is a blackbird no different from anyone else, except he has very skinny legs. Everyone around him teases him, mocking his walk and calling his legs “puny”. He tries a number of ways to change his appearance: over feeding, exercising, disguising himself… but it isn’t until he goes to an art gallery that suddenly the greatest idea hits him. It is one that doesn’t quite involve changing his legs, but rather adding something else on to his beak. The result? A stream of compliments from all characters, and a heart-warming finale.

Bob the Artist is the latest book by AOI Patron and highly acclaimed illustrator Marion Deuchars. Known for her best-selling Lets Make Some Great Art book series, Marion has inspired children and adults across the globe to be fearless, and to find joy in being playful and creative. This, in a way, is one of the lessons encountered within Bob the Artist, but it’s also a story about self-acceptance, confidence and finding comfort in being different. It’s a tale we are all very familiar with, but not in the way Marion depicts it. 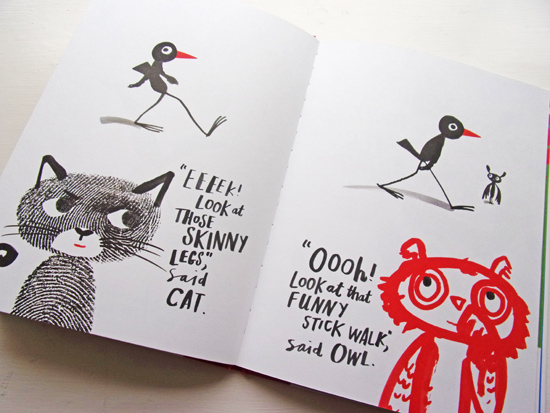 Her characteristic hand lettering guides the reader to meet each character and learn more about Bob’s woes and achievements. Each drawing feels spontaneous and effortless, confidently presenting each spread and inciting the reader to turn the page.

You might recognise Bob, or even Cat. These are characters that have been spotted before in Let’s Make Some Great Art, in Lets Make Some Great Fingerprint Art, in posters for Do The Green Thing, in an exhibition of Deuchars’ work at Cass Art Kingston. Like her calligraphy, her characters are also becoming icons across her body of work.

Young ones will rejoice to be a part of this world, and their parents will doubtlessly enjoy being a part of it with them too. Whilst children might not be able to differentiate a Matisse from a Pollock, they will fall in love with the brush strokes, the characters, and its lingering positive lessons. 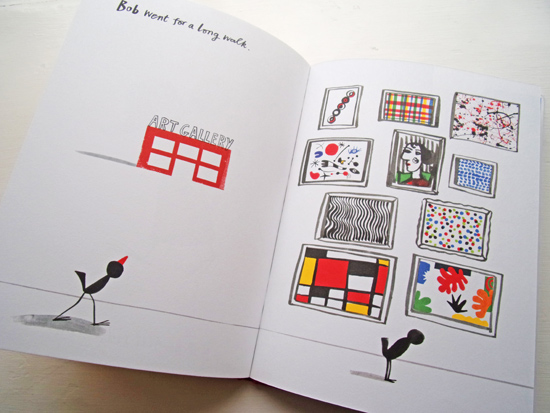 We wanted to find out more from Marion herself, so we asked her some questions:

This is your first picture book. What challenges did you face and what did you learn in the process?

I think the first time you do anything it sometimes feels easier because you don’t know all the rules and you jump in feet first.

I came up with some strong visuals quite quickly for Bob and a very rough story line. At this point I’d say it was image led. I had Bob in yoga positions for example before I integrated it into the story.

Once I started trying to write the actual story, however, I found it much more difficult. I was asking lots of friends for advice and receiving so many mixed responses that as a result I went along to a short course at City Lit called Writing for Children run by writer Lou Kuenzler. It was a fantastic short course (I’m now doing the longer one) and it really gave me the confidence to take this story and character further and complete the book.

It’s never too late to learn and I feel a complete novice in the world of picture books but I always like a new challenge. I’d like to develop a few more ideas that have been hiding in sketchbooks for a long time.

What do you want your readers to learn from Bob?

I’d like them to be inspired like Bob rather than learn some moral lesson. When I was writing the story I was tapping into those fears and doubts one has as a child. They seem so important at the time, they are life defining. Liking yourself and feeling confident are very important life skills and we should nurture those from a young age, they can take you far.

Who is your favourite artist?

Oh that’s always a hard question. I don’t have one favourite artist. I’m continually enthralled with the work of Matisse, Klee and Calder. I suppose the playfulness in their artwork is something that I aspire to. 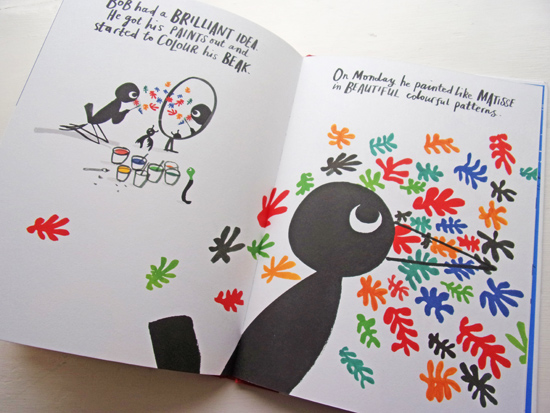 I Am Henry Finch