How do illustrators work with app developers to turn their wonderful print stories into credible digital experiences? Illustrator Ben Newman and Flying Eye Books new digital studio Minilabs reveal the do’s and don’ts in the transition to different formats.

Varoom: What is Minilab?

Minilab Studio: Minilab is a new digital production company created to deliver the most beautiful experiences in visual storytelling, learning and play that children can get their hands on. Starting out as the digital Research and Development of Nobrow and Flying Eye Books, Minilab was set up as a new company in January of 2015 by Nobrow-co-founder Alex Spiro and digital creative James Wilson. At Minilab, we adopt the same basic values of great design of the highest quality that our sister companies are founded upon. We work with teams of talented animators and developers, along with expert academics and the best illustrators in the world to ensure that we create the very best digital products for children that parents can rely on. We’ve just released our first app, Professor Astro Cat’s Solar System.

Varoom: Who is Professor Astro Cat?

Ben Newman: I had worked in a bookshop for many years, alongside working as an illustrator and being an avid collector of 50s & 60s books, was saddened by the lack of love that appeared to be going into non-fiction books. I was particularly shocked at what was on offer about space and along with my physicist friend, Dr Dominic Walliman and Alex at Nobrow, I decided to make a beautiful book about the Solar System. It didn’t originally have Astro Cat in it, but he’d existed since 2007 in prints and wrapping paper and he had always been popular in my work, so the thought of marrying him with educational content seemed so perfect that it had to happen. That book became Professor Astro Cat’s Frontiers of Space.

Professor Astro Cat and his friends act as a conduit to spread scientific fact in a fun way that children can enjoy. He wants to make learning fun because when done with love and humour, learning is easy. 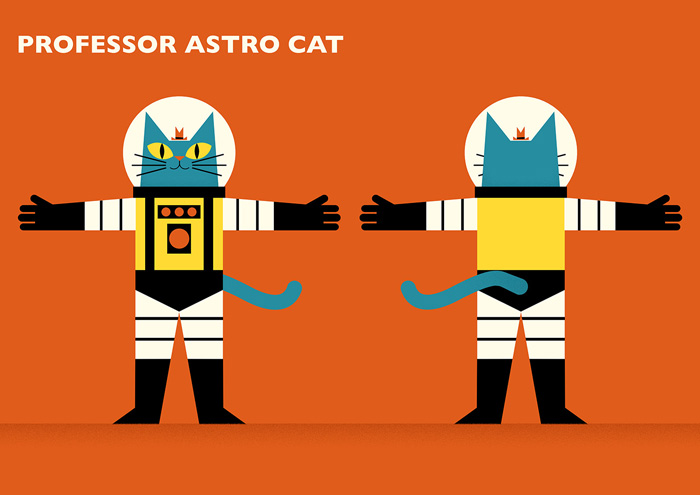 Varoom: Why did you choose Astro Cat to be your first app?

Minilab Studio: Professor Astro Cat’s Frontiers of Space had become one of the best-selling books on the Flying Eye Books list, selling 90K copies worldwide and translated into 13 different languages. With Minilab’s intention to create beautiful, educational, digital content for children and with this proven track record behind it, Professor Astro Cat became the obvious candidate for this new project. James has a background in animation and had previously collaborated with Ben on the creation of animated GIFs of Professor Astro Cat, so it was definitely his first choice for a project too.

Ben Newman: When James first showed me these GIFs, even though they were just for fun, they offered an interesting glimpse at the potential for an animated Astro world. It’s been a real joy to work with him on a professional project. 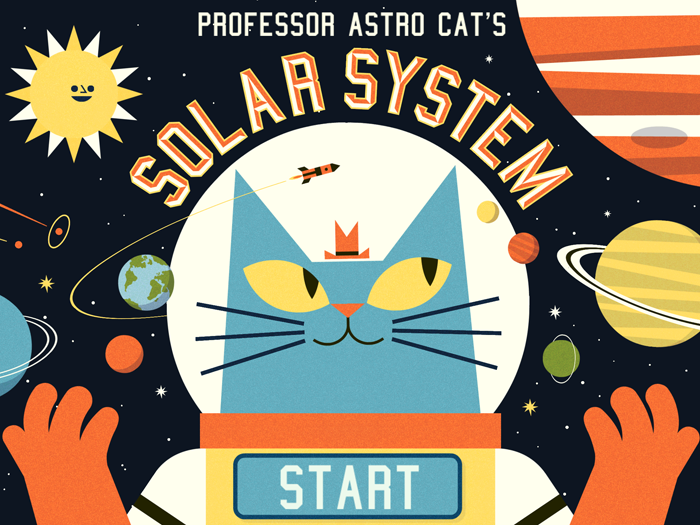 Varoom: How did you approach transferring from print to app?

Minilab Studio: One of the earliest stipulations of the digital Astro Cat project was that even if we were going to be covering similar educational content, the app should not be a straightforward conversion of the book. Astro Cat’s world and mission has been reimagined to create a brand new digital experience. There are plenty of ebooks and enhanced digital books out there that stick to the tropes and practices of print. The end result tends to look and feel like a glorified PDF, which is something that we really weren’t interested in. We thought that if we were going to develop a digital experience that started life as a book, we should offer something that a book can’t.

Ben Newman: For me, the interesting part has been to extend my trust to another person to draw things that match my aestheticI was not able to draw everything for the app because of other projects so James stepped in to keep the project moving. It is very odd to art direct your own work when you’re not drawing it, but it has cemented a bond of trust between us. 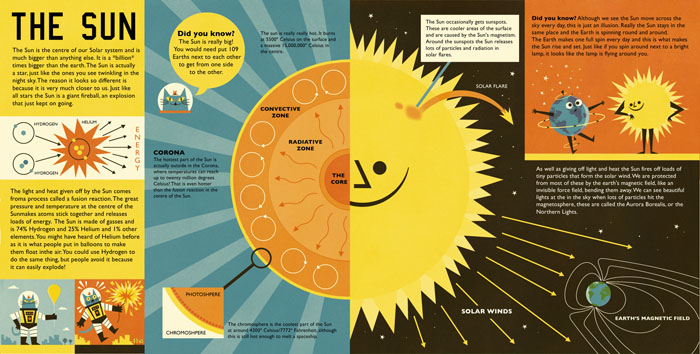 Varoom: What are the key difference in arranging the information for the book and the app?

Minilab Studio: When designing layout for a book, there is usually only one destination size. For example, in the book, the whole Solar System is shown across a double-page spread. With an app, the design of the layout needs to be flexible enough to work across a whole range of devices, ranging from squarer tablets to wider aspects found in smartphones and smaller devices. With the Solar System in the app, we get to see the planets up close whilst giving the user the understanding that there is more content ‘offstage’. The zoom function is a great example of playing to the strength of the format.

The app was built using Unity 3D, a powerful C# based platform that can run both 3D and 2D animations. Having the facility to use simple 3D models for the planets makes light work of conveying the planets spinning on their axis, whilst maintaining the 2D flat aesthetic of Ben’s artwork. This adds another level of information to the illustrations in the book.

Ben Newman: Breaking the page was very important. The digital app needs an anchor for all the information to move away and come back to. While a book is a more linear experience in which you physically go back and reference things, if you choose to. It was very interesting to adapt this because you have to design in a very different way. You need to think about what the viewer can’t yet see and how to take them there without the viewer feeling instructed. 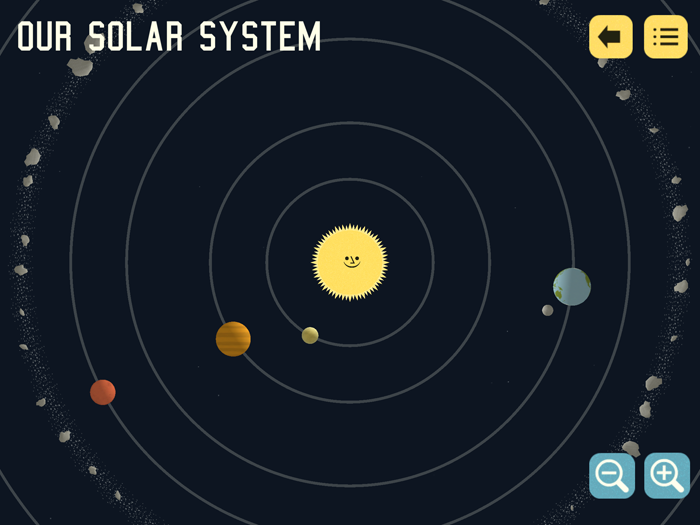 Varoom: What do you think are the unique strengths of both forms?

Minilab Studio: Books are what we know and love. They can be wonderfully rich and accessible sources of information, entertainment and inspiration. With a Nobrow/Flying Eye Book we go as far as we can to to offer something that readers can’t get anywhere else. In the Astro Cat book, we’ve presented educational content within a fully illustrated context, demonstrating the power of visuals to illuminate text in print.

With mobile devices taking up ever-increasing amounts of eye-time and the devices themselves becoming more and more ubiquitous, the digital revolution is not letting up. Children are both drawn to and adept at this new technology, and we want to make that screen time matter. It follows that with our digital offering we should be offering experiences that users can’t get anywhere else. Animation can add an extra element of life to visuals; animating Astro was a great way of expressing his character through motion. But digital experiences really come into their own when there are things a user can affect– making passive consumption OF MEDIA, active. So there’s lots to uncover, prod, swipe, read and also… play. 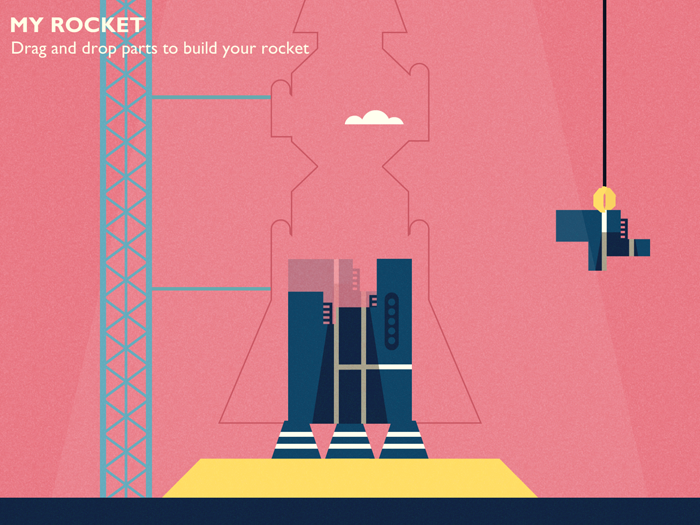 Varoom: The app gamifies the Astro Cat experience, how did you do this?

Minilab Studio: In Professor Astro Cat’s Solar System, even though the child can explore and discover all aspects at whatever depth, pace or order they like, there is a narrative, game structure that threads it all together. We added a simple game mechanic to incentivise the learning experience with rewards such as stars, medals and suit upgrades. These are won through a fun jetpack challenge that requires the child to answer true or false questions of varying difficulty based on what they have learned, in order to test and reinforce the knowledge. The hook that keeps things interesting is that with every medal earned through the jetpack challenge, the child ‘Cadet’ is rewarded with three pieces of rocket to build their very own rocket. All of this makes the child feel as though they are part of an active space programme. That they are qualifying for the real deal, like a digital version of space camp. By playing to the strengths of the digital format, we have allowed children to explore their own personalised, beautiful and educational adventure through space.

Varoom 32 is available on our online shop