The artist Patrick Prockter RA (1936 – 2003) first came to prominence in 1963, when his first show opened at The Redfern Gallery in London. Both critically acclaimed and a near sell-out, the show launched him as a star of the sixties art scene: this was remarkable given that he had graduated from the Slade School of Fine Art less than a year before.

The exhibition is opens with paintings and drawing made whilst Procktor was a student in the late Fifties. Amongst works of the Sixties of remarkable, rarely seen canvases, in which the artist can be seen to engage with the stylistic idioms of the day, moving progressively towards the signature style for which he became renowned. 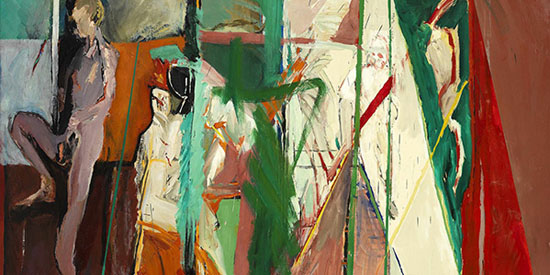 Curator Dr. Ian Massey has been closely associated with Varoom Magazine since its launch in 2006. Massey is an art historian, writer and curator. He is the author of the monograph biography Patrick Procktor: Art and Life (2010) and co-author with Anthony Hepworth of Keith Vaughan: The mature Oils (2012). Ian has lecture widely, giving public talks on his research in London, Edinburgh, Manchester and St Ives. For many years he taught in university art and design departments, before going freelance in 2014; he is currently working on a book about twentieth century St Ives artists.

Dr. Ian Massey is giving a talk discussing in detail the life and work of Patrick Procktor, his influence on art today and how his legacy lives on. TheGallery – 11 Feb – 5-7 pm