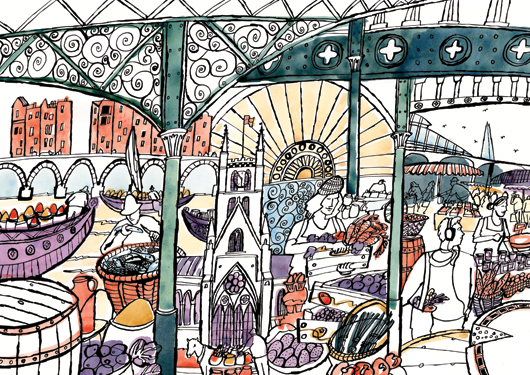 Your blog contains images of you on location, what difference does being on location make to the outcome of your illustrations?

I think I’ve always liked the immediacy of working on location. In some ways its limitations as a method of producing an image are also its strengths that certain things can come into your view for only a brief period, like a person, or a bicycle racing past, can make it an exciting way to work. I also think that this encourages a more spontaneous kind of drawing. 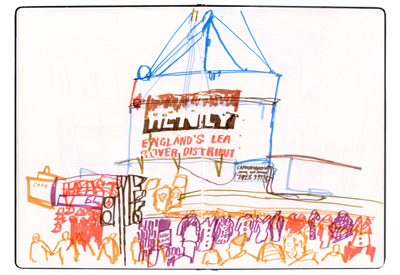 How do you develop the work you do on location into your final image?

In terms of producing a final image on location, I try to do everything I can on site, and then avoid the temptation to edit things later on. I think often the best thing is to rely on your first instinct as to when a picture is done and stick with it.

I’ve found that for some illustrations, working purely on location isn’t always practical, especially if certain elements need to be included in a particular way. What I’ve found helps is drawing from life first, in a sketchbook, and then using those sketches as source material.

I had a project recently that called for different images of people in interview situations. Working on location wasn’t possible, so I decided to start by sketching people in cafes first, and then used those sketches in the final images. I often found that the commissioner liked the preliminary roughs that were most similar to the original sketches. 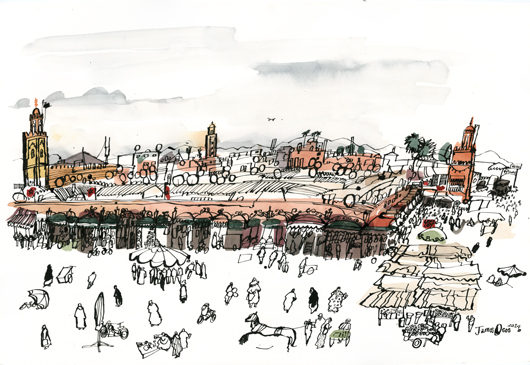 How do you go about contacting potential commissioners?

After I graduated, I found what helped was handing out business cards when I went out drawing. I would have these visible, so if I got chatting to someone, they would sometimes ask if they could take one, or I would offer. As old fashioned as this sounds, I found it a more effective way of getting work initially, than emailing, or sending promotional material out. This is something I still like to do.

I also sell prints of my drawings on Etsy. Actually a few commissions I’ve had, including more commercial ones, have been from people seeing a picture in someone’s home and then getting in touch.

You worked on a project for Borough Market, which is now displayed at a large scale throughout the market, how did you go about planning and making this project?

This was a really fun project to work on. Borough Market have been able to trace their history back to 1014 – quite amazingly – and wanted to celebrate 1000 years in the Southwark area.

I collaborate with designer Peter Gibbons who is responsible for the visual identity of the Market. Peter commissioned me to produce an illustration reflecting the changing nature of the market from medieval times to present day. The illustration, as well as having to work as a standalone image, had to work within a ‘1000’ logo that you see around the Market – as well as for various other purposes from banners to online media.

The number of different usages from small to large reproduction made it quite a challenging illustration to get to grips with at first, and a lot of preliminary roughs went back and forth, ironing out elements that wouldn’t work as well at a small scale. I also thought about colour for this one in a more methodical way than usual and chose a limited palette, intended to reflect the Market’s heritage. 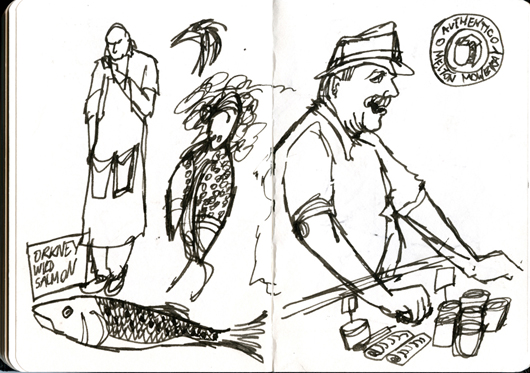 You use confident lines within your work, how did you come to this style of working?

While studying Illustration at Middlesex University I was very inspired by the reportage work of Ronald Searle, particularly his collections of drawings ‘Paris Sketchbook’ and ‘Looking at London’. I really loved how musical his lines felt, and I think I really wanted to try and emulate that.

One of my tutors, Martin Ursell, introduced me to dip pens and I found that I could get a variety of different lines with these and really liked how expressive they were.

I also feel that somehow pen and ink is a natural medium for drawing on location. It’s quite unforgiving really, as you can’t rub anything out, but I think that’s also part of its charm.

What has been your most enjoyable commission so far?

I have to say illustrating for Borough Market in general. As a student, one of my final projects was actually a sketchbook of drawings on the Market, so I feel very fortunate to have had the chance to work for them.