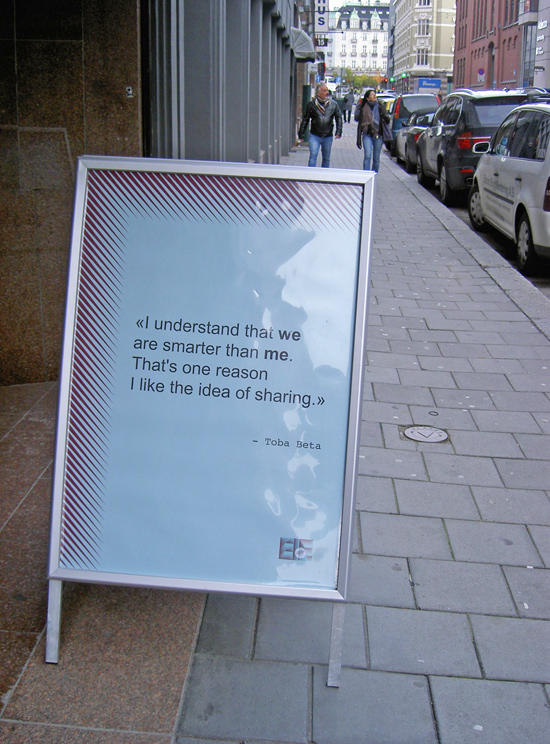 The positives of what illustration organisations are able to bring to their members were celebrated at the recent meeting of many European illustration groups in Norway’s capital city. 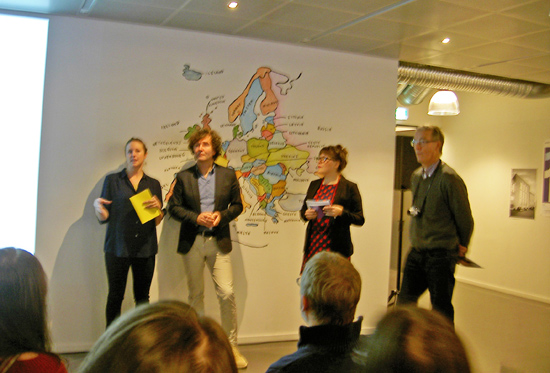 The Norwegian and Swedish illustration organisations collaborated on putting on an event called Sharing Possibilities to bring more European illustration groups together, “We have a lot of experience and knowledge to share,” said EIF President Catherine Louise Finstads of Grafill, Norway. The congress event was facilitated through Grafill and Svenska Technare (Sweden) applying for grants from national organisations, and Kristina Ketola Bore had been employed to project manage the event. 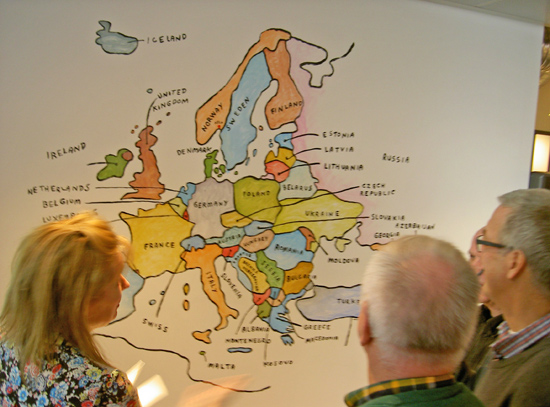 At the beginning of the first day Anders Suneson, illustrator and Board member of Svenska Technare introduced the EIF with an appropriately illustrated presentation, giving the history of the group from 2003, from its launch in 2004 at the Bologna Book Fair up to the present. EIF had investigated the potential to become an incorporated organization in recent years, but it had been decided that it was going to be too legally complicated. He talked about illustrators ‘sharing possibilities’ and the benefits of the EIF allowing us to share our experiences as illustrators’ organisations.

The day followed with several ‘Best Case’ presentations, a best case being something successful an organisation has produced. First up was Manuela Vladic-Mastruko from Croatia. She introduced her organisation, Arte Insula, and told the attendees about their project called Island of Childhood, “a place we have forgotten as we grew up, we had so much else to remember”, and how art plays “a constructive role in the development and completion of the human being”. She showed examples of her published work and the events Arte Insula held. 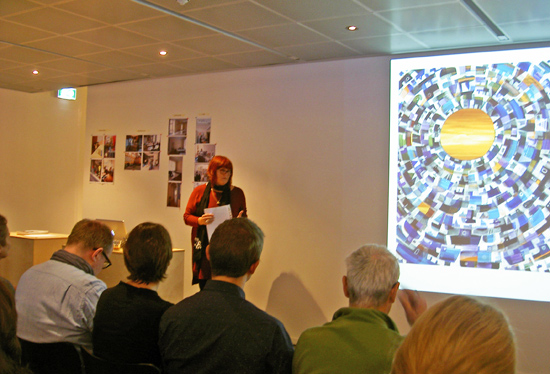 Eili-Kaija Kuusniemi from Kuvittajat, the Finnish group, then described the Kuvita! Illustration festival held in 2012 in Helsinki as one of Kuvittajat’s best cases. The event’s theme was ‘illustration in conjunction with art and design’ and consisted of displays, live painting and family events. The festival celebrated Kuvittajat’s tenth anniversary, and was something they’d not organised before. Eili-Kaija posed the question, “Does illustration have a national identity, or have styles merged?” Kuvittajat wanted to celebrate illustration ‘locally’ to help illustration in Finland grow stronger. The festival was more work than a small organization could easily handle (Kuvittajat has 300 members), but they hope to start a tradition of illustration festivals in Scandinavia. 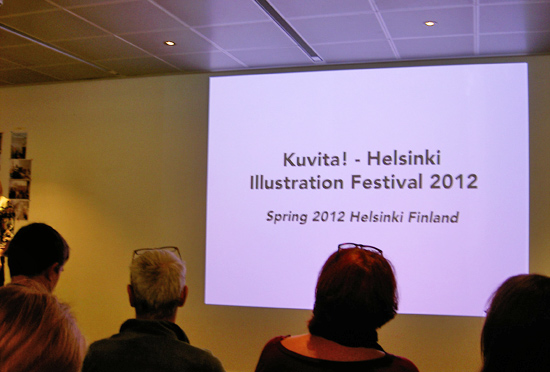 Then Tyra von Zweigbergk, Board member from Svenska Technare, Sweden presented their organisation, which has 1400 illustrator and designer members. One of their focuses is on raising awareness and getting better terms for members. Their best practice is on three levels: Personal contact with a legal advisor; agreements with commissioning companies (publishers, newspapers and TV companies); membership of a political Swedish umbrella organisation for lobbying. 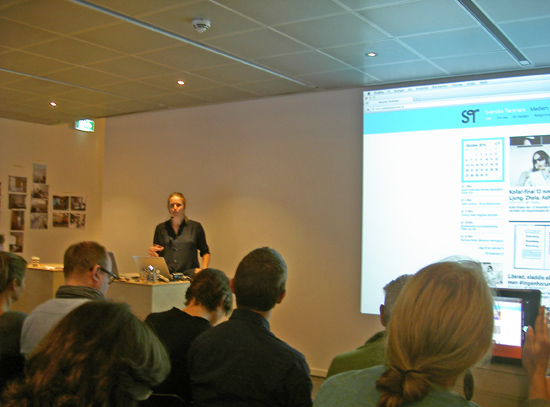 Martin Biehl, manager of the host Norwegian organisation, Grafill, talked about the background of the group, saying that their best case was moving from premises located in the suburbs of Oslo to the present expansive gallery/office in the centre, which had improved their profile. Grafill has 1450 illustrator, designer and animator members, and has ten local groups (as a long, thin country towns are far apart), and separate interest groups which include an Illustration Group. Eivind Vetlesen is the head of that group.

Sally Cutting, representing FADIP, the umbrella group of organisations from Spain, reported on the situation in that country, saying that FADIP had worked hard to counteract the attitude in Spain that “creation is not considered a cornerstone of cultural wealth”. 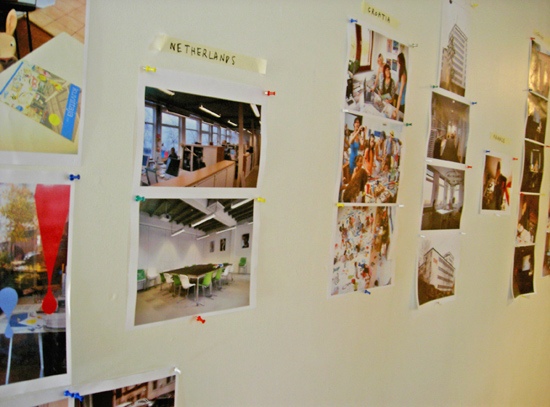 Photos from each organisations' office were pinned up

Gemma Cortabitarte Amorós, the manager of Spain’s Associació Professional d’Il·lustradors de Catalunya (APIC) organisation, spoke on their best case, an International Project which followed on from a survey of members asking them about working abroad, and what they needed to help facilitate that. 25% of their members actually seek work overseas and many others wished to, but wanted additional skills to do it with confidence. The conclusion from the survey was that APIC would provide training and information to members, which would include lessons in English. The organisation also targeted publishing, advertising commissioners and illustration agents overseas, and organised a trip to meet international clients.

In between every two presentations, the attendees were divided into groups of four to respond to questions about the presentations and how they were reacting to them, if they sparked any ideas for their own organisations, and how those might be activated. The groups came together to discuss any overriding themes in the afternoon. 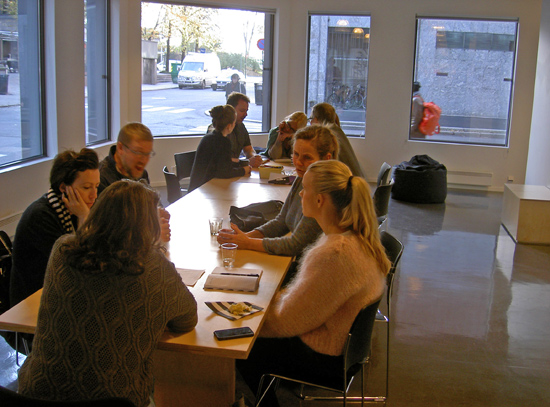 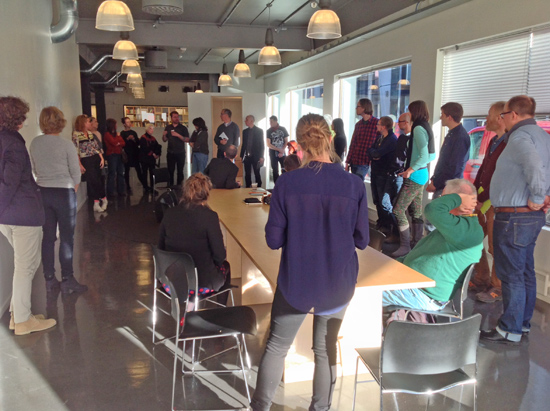 The delegates discuss the workshops. Photo by Anja Nolte

The Illustrators Guild of Ireland was represented by Alé Mercado who described their best case as a new style exhibition event, which gave more value to their members through expanding the involvement outside the group to include art directors and others involved in illustration. This lead to their Art of Superstition and Illustrated Beatles exhibitions, the latter benefiting from the involvement of DJ’s and music people who could promote the show through their own networks. 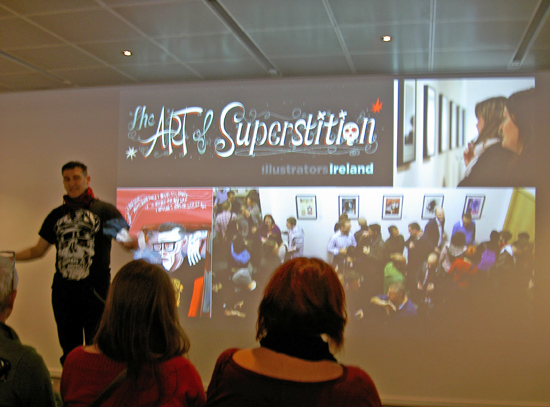 AOI’s Derek Brazell then gave a presentation on Varoom magazine, as the AOI’s best case, covering the history of the magazine and how editor, John O’Reilly approaches each issue. He gave a breakdown of the format of the magazine and the themes and subjects which Varoom covers, as well as talking about the VaroomLab illustration research network. 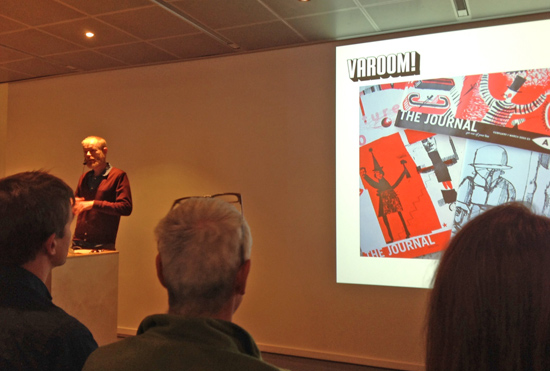 Following the best case presentations, in the afternoon the group were treated to a behind the scenes tour of Oslo’s dramatic iceberg-like opera house completed in 2008. Made of white marble with an interior using oak wood, the building was impressive yet welcoming. 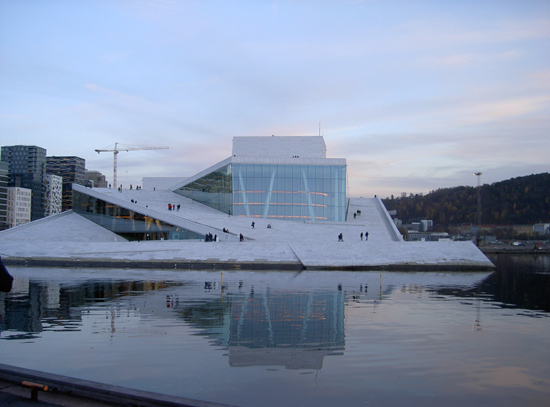 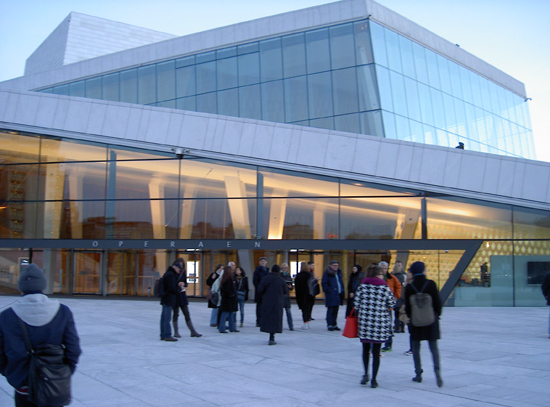 EIF members outside the Opera House

All organisations were invited to bring along representative materials to show, and these were displayed near the talks area. The issues of Varoom were quickly snapped up by delegates. 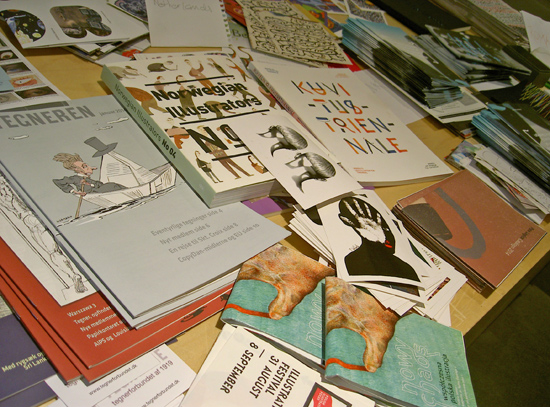 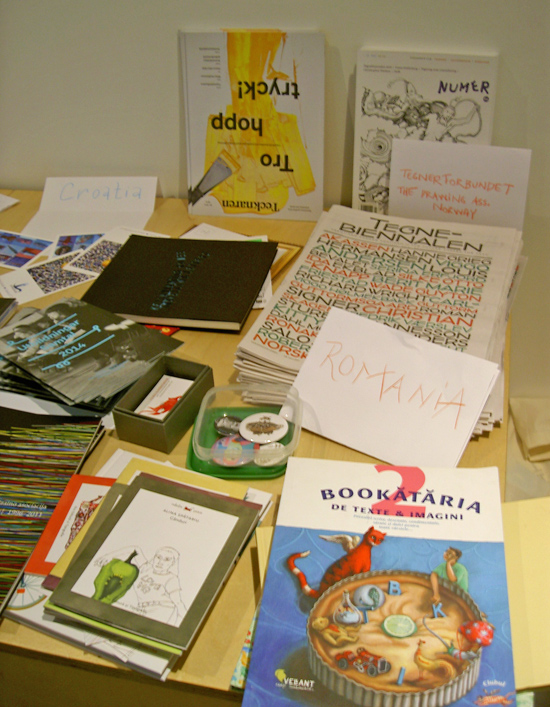 Friday commenced with the first of three invited speakers, André Letria from Portugal, who has worked as an illustrator since 1992, winning several awards for his work, including the Portugese Illustration Award and the Award of Excellence for Illustration by the Society for News Design. His books have been published in several countries, including the USA, Korea, Norway, UK and Spain. 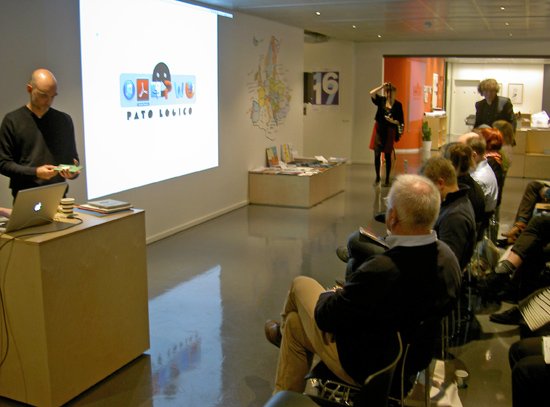 He introduced the audience to his independent illustrators publishing house, Pato Lógico. Saying he wanted to do his own self generated work, where “if I’m not well paid, at least I’ll do what I want”. He regards the books produced as a point of departure, and follows publication with extensive promotional events and school visits – “connecting with people”.

The first book from Pato Lógico was a ‘poetic’ football themed work which was not all that successful (“maybe football fans don’t read much”, he said), but subsequent publications started to sell and win awards.

He wanted to promote illustration as a separate craft with textless illustrated books with one word titles (Vazio, Capital) to show “illustrators are capable of being authors, as writes are”. 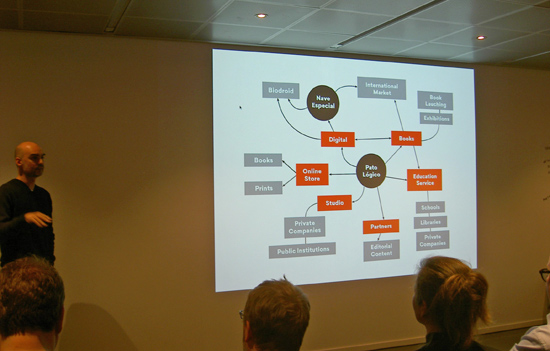 In 2013 he started the project Nave Especial, dedicated to digital publishing, with a regular conference and an award for digital illustrated stories. He believes that digital books should have a “new way of telling stories” – as a digital device is not a book. He asked, “What should we call a digital book?”

Charlie Hood was the next invited speaker. He runs Beach gallery in London’s East End, and the Beach set up includes doing commercial projects with brands with partner, Matt Lucas. The gallery has predominately exhibited London based illustrators, but has shown Europeans too, and encourages artists “to explore and develop their practice in a fine art context”. 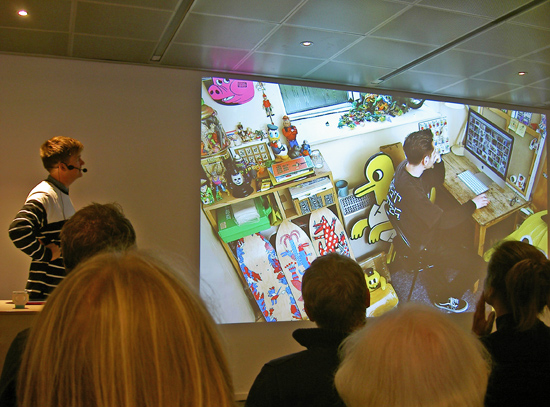 Charlie Hood of Beach in the UK

Charlie came to illustration through a love of skateboarding and after studying fine art (which felt “too fussy and formal”, although he has retained an interest in ‘experiencing’ objects). He likes artists who create work purely online, but then find a way to bring it into the physical world.

Selling artworks isn’t easy, so Beach focus on bringing artists together and showing work, and generate income through doing fun things at launch events. Beach are keen to give people a reason to come to the gallery, and they encourage exhibiting illustrators to paint directly on to the gallery walls for their shows, “telling the story of how they work”.

Sofie Hannibal of Hvass & Hannibal was due to talk next in person, but due to an injury had to Skype from Denmark instead. Sofie covered the history of Hvass&Hannibal, a multi-disciplinary arts and design studio based in Copenhagen, and what she and partner, Nan Na Hvass, enjoyed doing, from their early commissions decorating the walls of a cool music venue in their hometown to recent fabric designs for Heals of London furniture store. 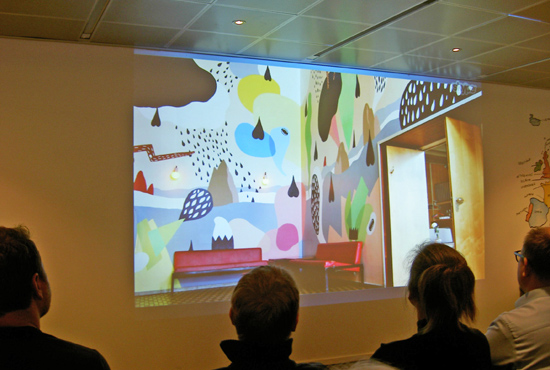 “We value freedom and experiences rather than reliable income’” she said, and as Nan Na and herself work collaboratively they “don’t have personal ownership of the work”. The way they work together is under constant change, and they debate about whether to expand into becoming a larger design studio, as they take on large projects where “a certain amount of anxiety and stress is inevitable”. The Skype presentation worked well, especially as Sofie was having to talk to her computer rather than the audience! 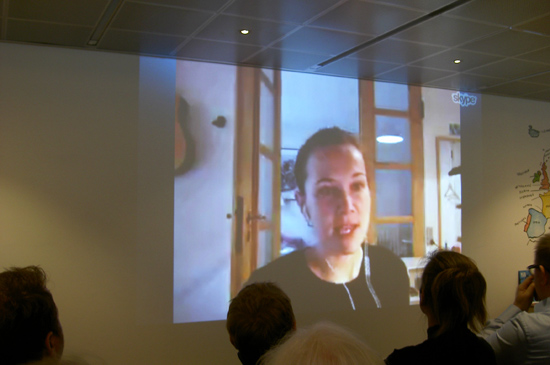 All three speakers took questions after their talks.

After lunchtime the European Illustrators Forum formal meeting took place with the EIF Board members and other the invited groups. This years projects were reported on, with the organisation of this congress being a worthwhile time consuming project, and with work on the new website continuing. EIF had lent its support to the Italian group AI, following a request from EIF Vicepresident Paolo Rui , as they challenged copyright issues in their country. 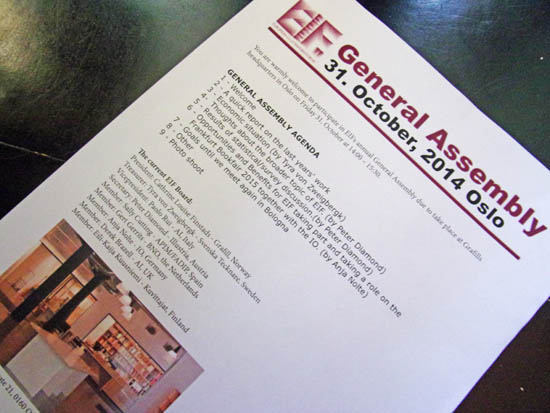 General EIF concerns were discussed, including how the regular EIF meetings with representatives from organisations were a valuable community building exercise and how that could be built on, to encourage European concerns to come from an entity which encompassed the European groups. Could this size of event (which was funded through Scandinavian grants) be done again? Groups agreed to look into possible funding opportunities.

An EIF survey had been discussed at the previous EIF meeting, and this was expanded on, with Secretary, Peter Diamond (of Illustria, Austria), reporting on his research into this. It would need to be short and clear and definitions would be need to be concise, it would also have to be funded. The group talked about what any survey results could be used for to ensure it would be of good value. Svenska Technare’s legal advisors would be asked if info on the European illustrators situation could be used by them. If EIF wanted to know about how each country was faring, then individual surveys could be undertaken. 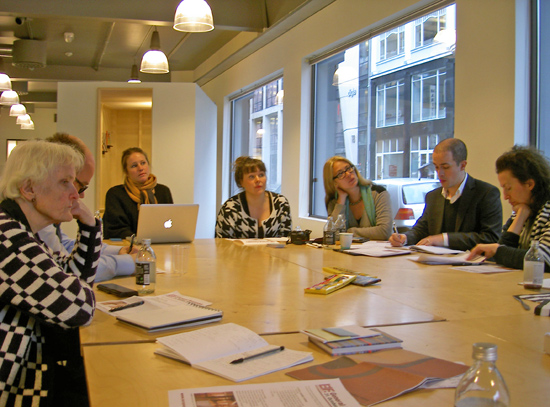 The next Frankfurt Book Fair in Germany was covered next, as a space to curate has been offered by the Fair organisors to EIF.  It was discussed how, if at all, this could best be used and what EIF may wish to present to the publishing world who attend the fair.

The meeting ended with commitments from attendees to share more information and to investigate funding. Attendees then dispersed to catch planes or spend a further evening in Oslo crispy air. 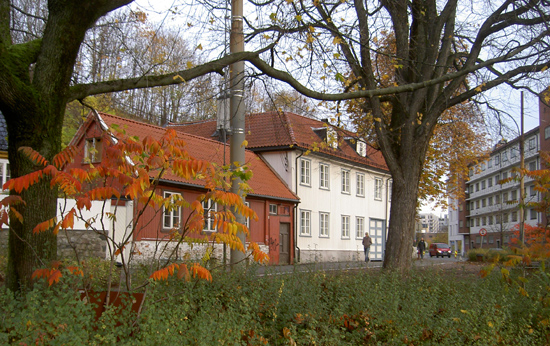