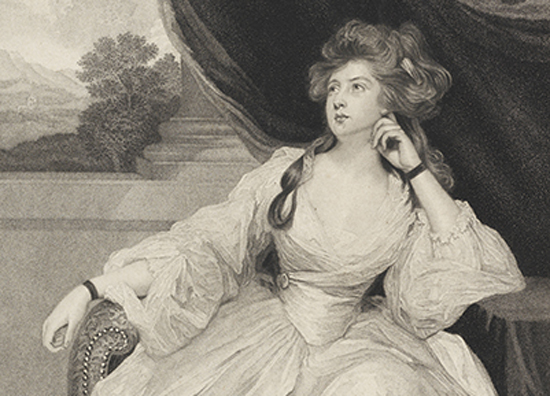 Caroline Watson was one of the most successful engravers of her age, with patrons including Queen Charlotte. A selection of her prints and several of her letters will be displayed alongside examples of other female printmakers in late Georgian England at The Fitzwilliam Museum. For the first time light will be shed on these largely unknown female artists.

Although Watson was the daughter of celebrated mezzotint printmaker, she was an early adopter of the new ‘stipple technique’, which was ideal for producing delicate portraits and decorative prints, many of which were aimed at female buyers. Nearly all those women who had earlier made prints were either making prints for amusement, or members of printmakers’ families. Watson made her mark creating prints catering to feminine taste, capitalising on the growing market of women with money to spend on luxury items.

Transcripts of her letters in the Museum’s collection are being published in the accompanying exhibition catalogue. They read like a Jane Austen novel; her personal relationships, everyday annoyances and triumphs are written in careful prose in letters revealing her working secrets.