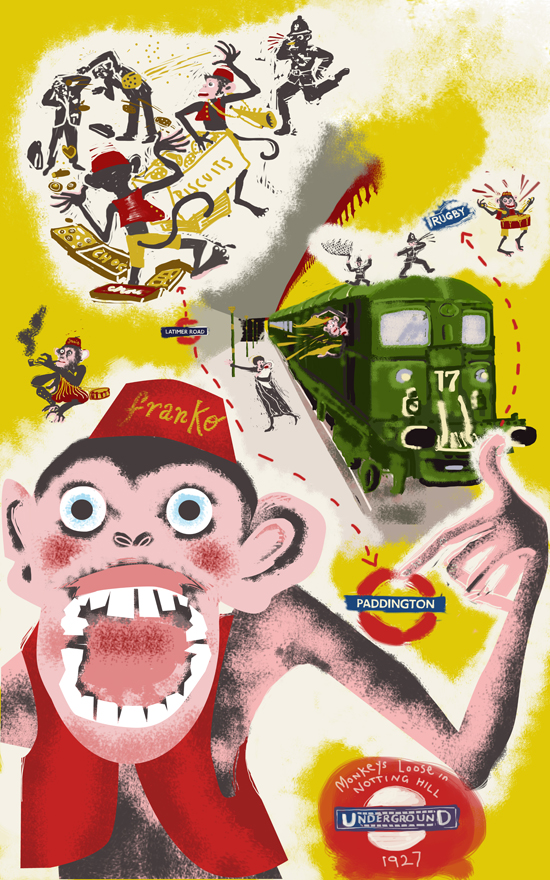 Artist and title: Gill Bradley for Monkey Band at large in Notting Hill 1927

Story: In 1927 an escaped Monkey Jazz band embarked on days of high jinks and mayhem at Latimer Road station. Jumping aboard trains one reached as far as Rugby before capture.

Artist’s background: Gill is primarily a Director and Designer/Animator. Her career has covered making films for commercials and TV graphics, mixing live action, stop frame animation and drawing for clients including Saatchi & Saatchi, Debenhams, Virgin, Channel 4, BBC and Rai Uno, as well as music videos for Tom Jones, Peter Gabriel and Kate Bush amongst others. Gill also works as an Illustrator and Designer and has taught animation at The John Cass School, Kingston University and at Filmakademie Baden-Würtenberg, Stuttgart.

Judges’ comment: Gill’s image leapt out (like a mad monkey) straight away. The Monkey Jazz band was an excellent story with a lively narrative, which was so bizarre that it didn’t matter if it was real or not. We were drawn to the evident humour of the image, strong colour palette and the fact that it was a bit bonkers, and felt that commuters would find it very intriguing to look at during their travels. A fitting winner to bring a smile to people’s faces.

Prize: £2,000 plus a poster on Transport for London services.