News / Lindsay Lombard, The Raw and The Cooked #5 Graduates 2013 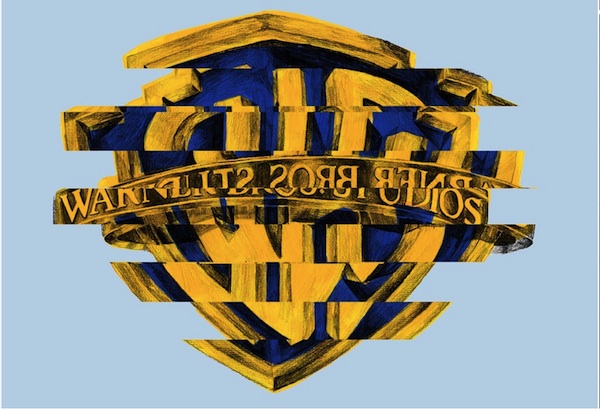 Camberwell graduate Lindsay Lombard turns an iconic work by a philosopher into a visual Handbook to California – John O’Reilly totally gets it.

Reading America by Jean Baudrillard as a young post-grad almost a lifetime ago, it felt contemporary and urgent, it’s references topical – “Boy George, Michael Jackson,  David Bowie. . . Whereas the idols of the previous generation were explosive figures of sex and pleasure, these new idols pose for everyone the question of the play  of difference and their lack of differentiation.” (America,  Jean Baudrillard).

The topicality of Baudrillard’s writing – whose main area of inquiry was  ‘media’,  the image, and the challenge of engaging in a world coded by ‘signs’ and ‘images’ – can also make the work feel dated. Unless you were a Marxist planning a revolutionary utopia, ‘future-proofing’ wasn’t an idea knocking around 80s philosophy departments. Which is why the California Dreaming project by Camberwell Illustration graduate Lindsay Lombard is such a refreshing take on Baudrillard’s thinking. 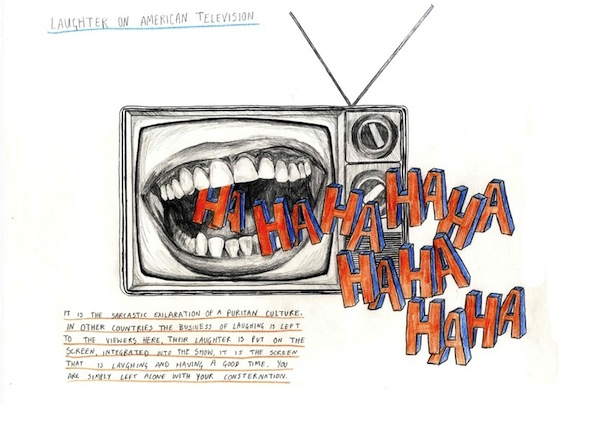 California Dreaming turns Baudrillard’s America into a handbook, a usable tourist guide to California as seen by Baudrillard.  Lombard gives each observation a different treatment, it’s not an exercise in style.  The question of the power relationship between text and image – a cross it seems that every illustrator has to bear – is swerved like a Venice Beach skater. Lombard takes the original work and makes it her own. Baudrillard’s America is philosophy as a Road Trip, and it’s taken the imagination and insight of a young illustrator to see that and deliver it as a visual, conceptual, tourist guide (all tourism is an exploration of images).  So what is California dreaming of?

It dreams of driving, of overcoming the idea of distance through endless driving, in Lombard’s illustration of driving as time divided by endless visual repetition. 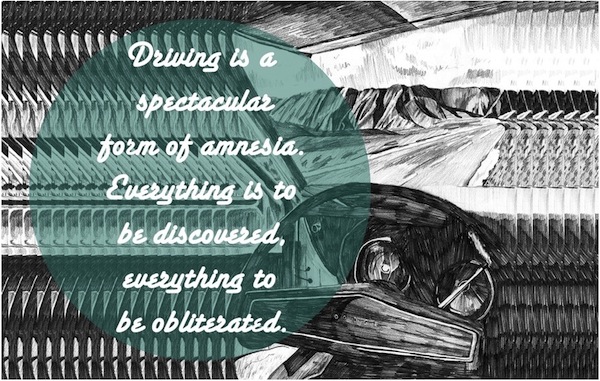 It dreams of rich people and academics (surely only Californian?) as half-people/half-goldfish, evolved to survive in the luxury of their self-contained aquarium. 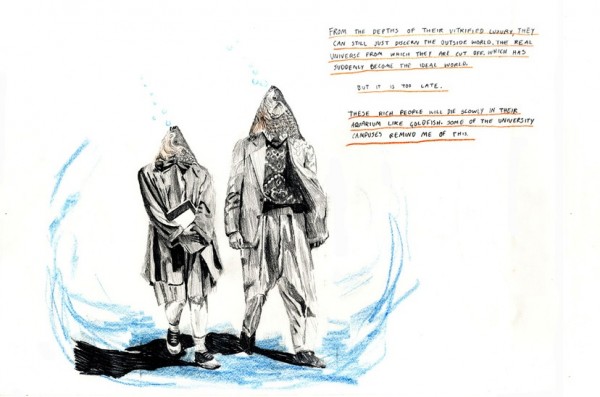 Above all else it dreams of the perfect image, of Disneyland, in Lombard’s queasy image, a drawing that gives a paradoxically ‘lenticular’ effect, an effect of depth in a world of images where Baudrillard argues there is no depth, only images and signs and their  circulation as political, social and cultural currency. And that was in the age before blogs and social networks. 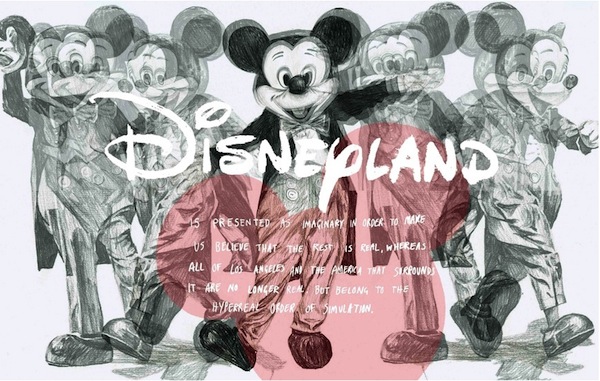 “That’s all very cool, swimming in your writer’s Aquarium,” I can hear you say as you drop your pencil, taking a sip from your Bellini (it’s my Aquarium, ok?),“but how does that help me get work?”

Firstly as a new illustration graduate you have had the opportunity not only to make work and experiment with process and style and formats, but to do research to think critically and reflectively and evaluate about how your imagery and other skills might sit in the market, in the business of 2013.  That gives you an edge – in business terms let’s call it ‘insight’.

Secondly you don’t have to buy into Baudrillard to register that we swim in a visual economy (the aquarium metaphor has mileage) where images are not just a currency, where they don’t just circulate, but are the medium in which everything else circulates.  On the negative side, we are in a culture of ‘image feedback’, the clearest example being the blogs, websites, portfolio sites that everyone visits and why work can seem familiar. Style, Shmile. The point is not to have a style, the point is to have a point of view, which is why your critical insight is commercially invaluable. You are provider, creator and maker, your training in ‘imagery’ makes you an expert, and being new at a time of change gives you a small but significant advantage.  Remember, when business models (especially in the media) are changing so fast, you are ahead of people who are wedded to doing the same thing they were doing 10 years ago.  Habit can be a cruel master’/mistress.

Thirdly, in business terms, the traditional Vanishing Point of the illustrator professional – the place where work disappears into the hands of the traditional commissioners is…. vanishing.  The contemporary illustrator needs and has access to multiple perspectives on raising cash for work. So on the one hand, as a young illustration graduate interested in being involved in magazines, you could have written for 10-15 years  for a trade magazine, got on the editorial ladder, eventually commissioning writing and pictures. Or like the recent Camberwell graduates of Limner Journal you could just raise the cash yourself, and make your own magazine. The contemporary illustrator needs to think beyond the Vanishing Point, the perspective of previous generations that embeds how we see things. 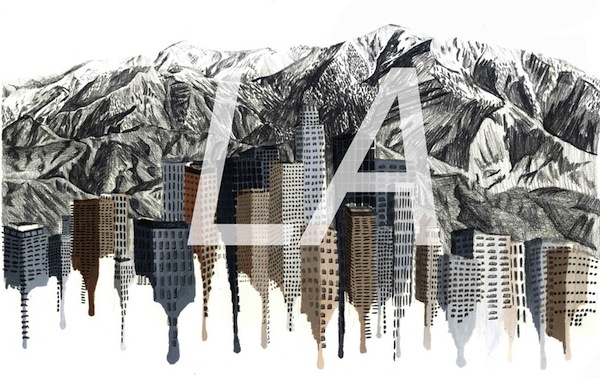 So Lindsay Lombard re-invents a philosophy book as a visual, idea-based, tourist guide. Next steps? A publisher? Kickstarter? A series of such guides visualizing ideas through geography – Albert Camus’ Beach Guides?  Whatever happens, California Dreaming shows to commissioners that she can draw, has ideas, can turn her hand to many different styles.

I wrote my doctorate on Baudrillard, calling it The Vanishing of Jean Baudrillard. Turns out, like Bobby Ewing, he didn’t vanish – damn philosophers. I met him at the ICA in the early 90s in a haze of cigarette smoke, drinking red wine, being generously kind about the thesis title, an idea he relished. Deep down, though he would resist the idea of ‘deep down’, he was a surrealist who didn’t believe in the ‘unconscious’. He is now dead but hasn’t vanished, and I’m sure he would raise a glass of red to Lindsay Lombard, seduced by the idea of returning as a California Tourist Guide. 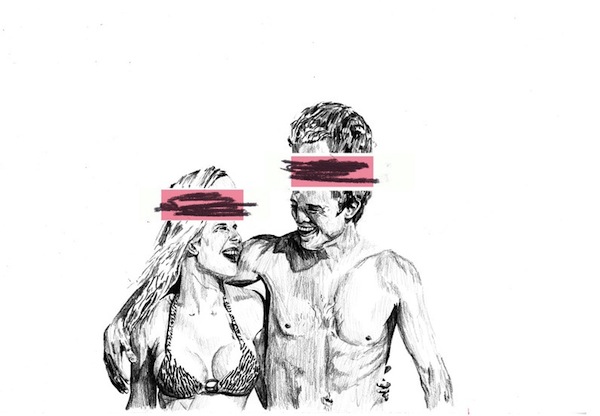 Why Baudrillard? Why did you pick him out of other thinkers and what was it about his work that excited you?

Lindsay Lombard: Admittedly it was sort of by chance. I was struggling to find an idea for my final project and dissertation, so I just started drawing things that interested me. I was drawing from an old book on New York, and as I looked for more material to draw from I stumbled upon Jean Baudrillard’s ‘America’. I became fascinated by his work – and read book upon book – not only by the content but also his somewhat sporadic style of writing really caught my imagination. I read other theorists who researched in the field of hyperreality such as Umberto Eco, Daniel Boorstin and Douglas Kellner – but I was always drawn back in by Baudrillard. I’d never read anything quite like it before and I guess that’s what excited me the most about it.

The book isn’t an exercise in style, you give each idea a different rendition, from the heavily drawn to the very painterly, to the graphic. How challenging was that?

Lindsay Lombard: This was the thing I struggled with the most throughout the creation of the book. It was at times hard to accept that there wasn’t a singular universal style to the book, but I tried to sympathise with the scene I was creating and use a medium that considered this. I tried to create each image in either mainly paint with some pencil detail, or in pencil with some painted colour. I wanted the book to not be too self-indulgent in a particular style and really showcase a range in imagery and ultimately portray the existence of hyperreality in California. 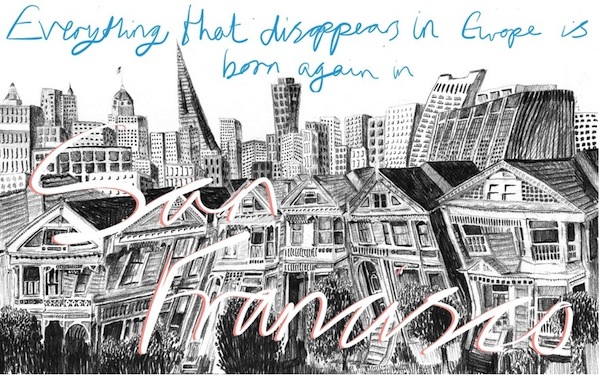 How have Baudrillard’s theories of the image affected your understanding of illustration as a practice and as a commercial medium?

Lindsay Lombard: It’s definitely made me question a lot of the day-to-day things that we’re unknowingly exposed to and in a way manipulated by. In California Dreaming I tried to create manipulated images, for example with the images of celebrities and Hollywood, to show how they create themselves as an ‘ideal image’; the result of this being that people begin to idolise them simply because they’re famous. The idea of fame has been manipulated and so with that the idea of the perfect image is thus a manipulated vision.

You describe it as a ‘Handbook’. In that sense it’s not ‘just’ a book of images, how would you expect people to use it?

Lindsay Lombard: I didn’t want to simply create a book of images, I wanted the book to serve a purpose and so decided to create a handbook to California; the idea with it being that people going to California could take it with them as an alternative ‘guide’ to the area. I based it loosely on a guidebook with the inclusion of things like maps, and having it broken down into sections of the North and South of the state.

Favorite image in the book?

Lindsay Lombard: Probably the flag image, it was the first image I made for the book, and it’s always shone through for me. I guess it paved the way for the rest of the book in terms of style and visuals. 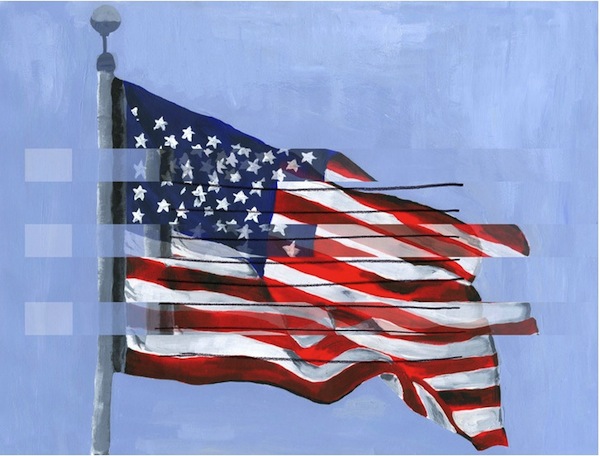 I also like the image of Yosemite, I visited the park when I was younger and I’d love to go back, it really is an area of outstanding natural beauty, and I tried to convey this in my drawing. Baudrillard talks a lot about how some of the American landscapes are so cinematic it looks like you’re watching a movie and this really sums up my memories of it. 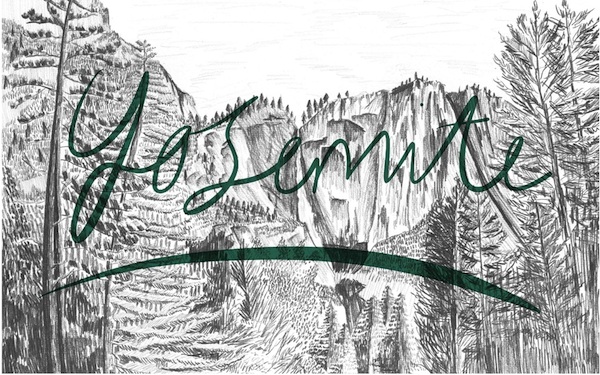 Tell us one thing you took from your degree?

Lindsay Lombard: Just being true to yourself and trusting your instincts, it’s easy to look at other people’s work around you and think why doesn’t mine look like that?! I think everyone falls into that trap at some point but it’s how you come out of it and develop from it. As well as that – practice! My best work really did come when I was fully submersing myself in my illustrations, the more I worked the better I got.

Next steps with the Book? Next steps for Lindsay Lombard?

Lindsay Lombard: I am trying to find a way to print the book in a cheaper format to allow it to be more affordable. I have a few magazine copies as well up for sale. Aside from that, I’ve been invited to work on a children’s book, it’s quite new to me but I think it will be a fun challenge, so that’s occupying some of my time at the moment. After that I’m going to try and start looking to create some editorial pieces. I know how important it is to keep drawing and active as an artist so I’m still doing my best to continue to draw and paint in my free time.