Ronald Searle celebrates his 90th birthday on 3 March 2010. Regarded as â€˜The Masterâ€™ by cartoonists not only in Britain but around the world he is still drawing and continues to inspire cartoonists, illustrators, animators, film makers and artists in many fields. This exhibition shows 140 works from across his seventy- five-year career, from his early cartoons for the Cambridge Daily News in the 1930s to political cartoons for Le Monde in the 2000s. Â Many of the pictures have been lent by Searle himself. The focus is particularly on his reportage drawings which show Searleâ€™s skill for capturing the essence of an event, character or situation. 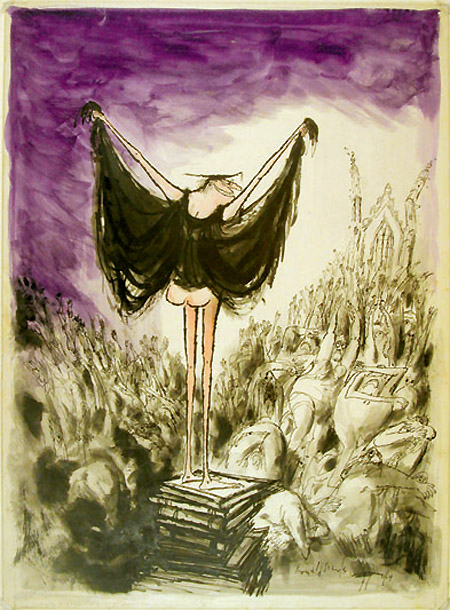 â€˜To say he is an artist is no more than the truth, but he is more than that: he is our greatest living cartoonist with a lifelong dedication to his craft â€¦ His work is truly international, yet absolutely grounded in the English comic tradition.â€™ Steve Bell

â€˜I owe him a huge debt as an inspiration. In my workroom Ronald Searleâ€™s books share the shelf with Rowlandson and George Grosz. He belongs with the masters in a great tradition.â€™ Â Â Posy Simmonds