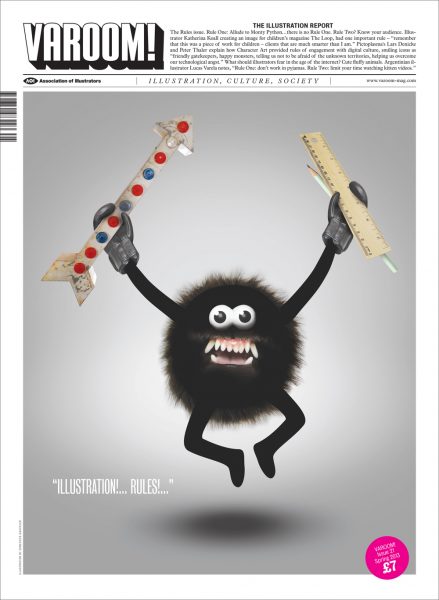 There are Rules to be made and those to be broken. Illustrator Katherina Koall, on creating an image for children’s magazine The Loop, had one important rule – “remember that this was a piece of work for children – clients that are much smarter than I am.”

Geneviève Gauckler when considering her Varoom cover thought it would be necessary to find an object that represents Rules, “I thought of the ruler and an arrow, that kind of makes sense. Right now, I like using texture such as fur to com- pose the body of my babies! I still like when they look be- wildered, stupefied.” As editor John O’Reilly, concludes, “Creative rules are acts of imagination, and great illustration helps us find them.”

Over the last 15 years McSweeney’s publications have challenged both reading conventions and establishment ideas of ‘literary’ value. Bryony Quinn interviews the Art Director and Illustrators who have used illustration and design to drive a publishing brand.

MOTION: THE SHIFTING WORLD OF COMICS

John P. Lowe investigates the story behind an iPhone/iPad app and a tool for illustrators that open new possibilities for graphic storytelling and selling stories in Madefire comics. Artists Liam Sharp, Dave Gibbons and Kinman Chan describe how it started.

Mitch Miller describes his project in Glasgow where he explored the possibilities of illustrating an environment as a collaborative, socially engaged practice. His challenging project is a VaroomLab peer-reviewed paper.

Nobrow publisher Sam Arthur and illustrator Viviane Schwarz discuss their relationship on the publication of the first book of a new imprint – Flying Eye Books.

THE MAN WHO FELL TO EARTH

With the release of his first album for ten years, and an upcoming show at the V&A museum, what is David Bowie’s image worth? Illustrator Tony Wright reveals to John O’Reilly the making of his book cover for The Man Who Fell To Earth currently up for sale.

Reportage: “The 24 Hour Musicals”, a fundraiser project for The Old Vic Trust, directed by Kevin Spacey, challenged actors, writers, directors and composers to conceive, write, rehearse and perform four new musicals within 24 hours. A team of illustrators captured the event on paper and iPad.

Fashion: In a world where most images of fashion we encounter are highly polished and impersonal photographs, Artaksinya’s and Sabine Pieper’s pieces provide a welcomed visual respite.  Selected by Ligaya Salazar.

Personal: “Some people love the movies. And some movies, especially from our childhoods never leave us.” Liz Farrelly talks to Andrew Degraff who re-imagines narratives of movies through architecture, landscapes and visual language.

Publishing: Communicating to children through the format of a magazine has been significantly adapted due to the creation of Anorak and The Loop Magazine. Anorak editor and the editors from The Loop Magazine as well as contributing illustrators explain to Jeremy Leslie.

Cartoons: Bold, mosaic colours are a good way to describe Illustrator Lucas Varela’s work, which has been commissioned by The Financial Times Weekend to illustrate Robert Shrimsley’s column.

In this issue’s I Wish I’d Done This, Christine Berrie selects an image by an intriguing Seattle artist who creates categorized images of items using close, meticulous observation.

If only there were a set of Rules an illustrator could follow… Now there are 51, courtesy of regular columnist, Paul Davis. Marian Bantjes creates an exclusive artwork on breaking rules, saying “every time I make a new piece of work I create a new set of rules”.

Varoom 21 is sold out. 64 pages of great images and insightful comment. Break the Rule.