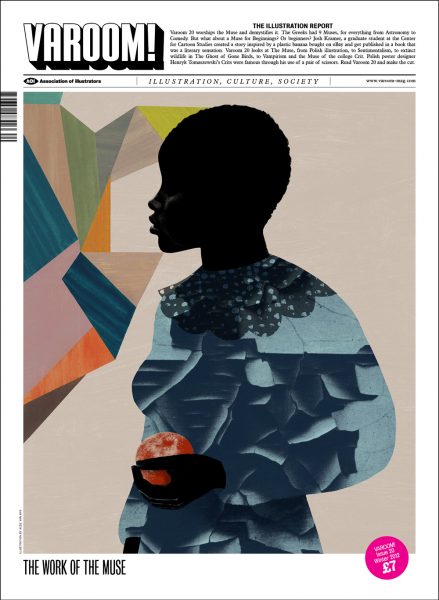 While ‘inspiration’ often simply means context-free imitation of style, the true Muse has many sources. Varoom discovers that The Muse is a powerful mix of critical reflection, hard work and love.

The magic of The Muse is in the strange power of focus given by a mug of tea, in the trusted observation of a colleague, in the rich research and planning that informs and narrates the creative process. Most of all The Muse is about acquiring the critical tools, the understanding of context to step in at the right moment in the process and make a productive decision. And then take an inspiring slurp of tea.

When being a stylist or a copyist no longer cuts the mustard, critical thinking is more important than ever for professional illustrators. Roderick Mills and Jasper Goodall examine that special space called The Crit where students first learn to reflect on their image- making, their creative thinking and ultimately their professional, artistic and personal ambition.

Natural history Illustration was once imperious in its cultural and scientific power, Derek Bainton reflects on its glorious past and flags up a major new project: Ghosts of Gone Birds includes a wide range of illustrators in a awareness-raising project driven by illustration.

VALUE: THE MUSE OF THINGS

The story of an experimental ebay project that became a sensation, and of the young illustrator Josh Kramer who sold his first story.

For many contemporary image-makers and critics, Polish illustration and graphic design is the ‘original’, mythical source of inspiration for visual thinking. Desdemona McCannon nails some of the truths and myths behind this extraordinarily rich visual culture. Including work from Andrzej Klimowski, and Cyprian Koscielniak.

SENTIMENTALITY & ILLUSTRATION: A Case for Blackmail?

From birthday cards to Hello Kitty to the current nostalgia for analogue materials and practices, illustration and sentimentality are the default media of modern life. Is this bad? On the contrary argues Darryl Clifton, sentimentalism is the essential requirement of creative practice.

GRACE PLUNKETT & THE MUSE OF THEATRE

The life of Irish illustrator Grace Plunkett involved revolution, imprisonment, and the execution of her husband three hours after they married. bIll Prosser examines the life and work of an illustrator who found inspiration in the theatre, and whose sensuous black and white drawings find echoes in contemporary graphic novels.

Reportage, from Derek Brazell, finds Thea Brine recording the more mundane aspects of the British public’s lives, bringing character to the fore, and capturing the stance and expressions of her figures.

Tristan Manco’s Street Art selection comes from Interesni Kazki (Interesting Fairytales) who are from the Ukraine, and do individual and collaborative murals of  great intrigue and colour.

In Marketing, the Ted Baker clothing brand and their Baker’s Dozen campaign, a collaboration with the Association of Illustrators, is discussed by John O’Reilly, the fashion company and some of the illustrators involved.

And in Publishing, Jeremy Leslie takes a look at new writing publication, Popshot Magazine, and talks to founder, Jacob Denno, and illustration contributors.

Marian Bantjes challenges viewers with her double page spread maze. Is there a way into the center? And Varoom’s other regular columnist, Paul Davis, asks ‘What happens when your Muse buggers off with your Mojo?’

Claudia Boldt, publisher of new children’s magazine The Loop, selects the image (from the 1950’s) that makes her think ‘I Wish I’d Done That’.

Varoom 20 is available from the AOI shop. 64 pages of great images and insightful comment. Follow The Muse.