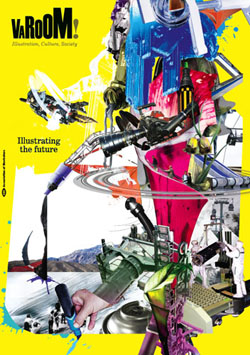 ZODIAC 21 12 illustrators from around the world illuminate a new Zodiac for the 21st Century in an inventive collaboration combining art, satire, and science-fiction. Written by Paul Morley’, the new Zodiacs include the Sign of Andy Warhol’s 15 Minutes, the Sign of the Sex Scandal and the Sign of the War On Terror.

LIFE IN 2050  Illustrators picture life 40 years from now, and exclusively reveal from the future what it’s like to be an illustrator in 2050. You’ll be intrigued – a lot has happened.

ANIMATION’S BRAVE NEW WORLDS  Where goes animation in the age of Avatar? Darryl Clifton hears echoes of William Blake in the visionary worlds of Quayola, Max Hattler and Richard Fenwick, offering an alternative perspective to Hollywood.

NEW FRONTIER  Omni magazine created a fusion of science and art, all wrapped up by spectacular illustration. Chris Hatherill looks back at a legendary magazine.

THE FUTURE IS JUNK  Collage artist Paul Burgess explores why collage has become such a hot ticket again. He reveals that carefully collecting images, and the art of destroying them, is often essential in creating a vision of the future that isn’t smoothed over by convention and consensus.

THE ART OF SCIENCE  Science, technology and futurist magazines have never been more popular. We reveal the crucial role illustrators have had both in making science ‘cool’ and in visualising what new technologies really mean for us.

SOMETHING OLD, SOMETHING NEW…  Dave McKean’s illustration treads the line between reality and its close friend, the fantastic. The Sandman and Coraline illustrator selects some great work from his career.

I WISH I’D DONE THIS  Oliver Jeffers, creator of The Boy Who Ate Books and new book The Heart In The Bottle, explains how his discovery of painter Mark Tansey changed the direction of his own work.

Varoom 12 is available from the AOI Shop