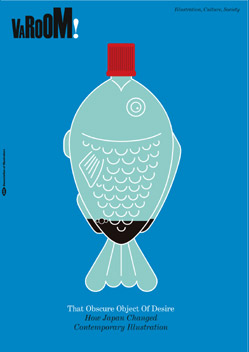 AIMEE & THE ILLUSTRATORS  How musician Aimee Mann used illustration to shape the creative direction of her career, putting imagery at the heart of her music. Illustrators Gary Taxali and Owen Smith demonstrate the power of sleeve art.

FROM FOLK CULTURE TO MODERN BRITISH  The current generation of artists, inspired by Folk Art, are forging a new British vernacular in illustration. To them Folk Art means more than drawing owls or men with beards. Jonny Hannah and Chris Brown reveal how they are working within a trade.

JAPANISM: THAT OBSCURE OBJECT OF DESIRE  2009’s wave of Japanese culture arriving on UK shores is a timely moment to explore the deeper connections between British illustration, Japan and consumer products. Takashi Murakami is featured as well as James Joyce, who created this issue’s cover.

THE HOOD LIFE  An intimate portrait of illustrator Peter Arkle. Documenting the minutiae of his everyday life in his own newspaper gave Arkle a cult following, it was also a smart business move. Find out why.

THE HOUSE THAT QUENTIN BUILT  Famous for his children’s illustration, Quentin Blake’s work is taking off in unexpected and ambitious new directions. Aside from discussing that, Quentin also reveals why he needs £6 million for an ambitious new project.

SOMETHING OLD, SOMETHING NEW, SOMETHING BORROWED, SOMETHING DREW  This issue we get a snapshot of work by Richard Kenworthy from animators Shynola. Kenworthy’s late collaborator Gideon Baws is included in his choices.

MANIFESTO  Danish fashion illustrator and artist, Naja Conrad-Hansen, displays her striking work in Manifesto. Includes images she has created for a variety of fashion labels, magazines and books.

NOTEBOOK  A jam-packed, all-you-can-eat hamper of illustration news, reviews and features. Lots of interesting stuff to dip into.

Varoom 11 is available from the AOI Shop