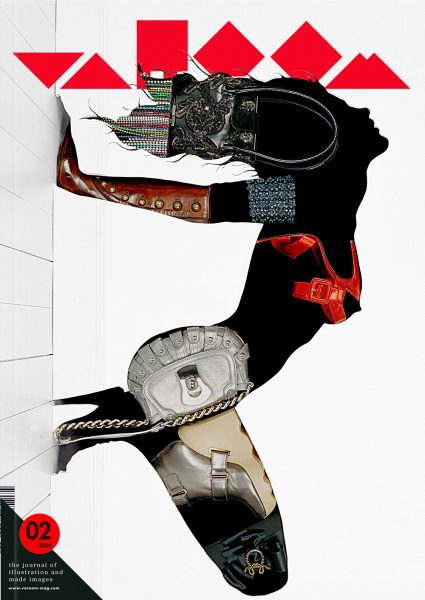 PIXILATION OF A KIND:  AN INTERVIEW WITH IAN WRIGHT  BY ADRIAN SHAUGHNESSY  The illustrator Lawrence Zeegan has called Ian Wright ‘the daddy, or maybe even the Grandfather of contemporary illustration.’ Wright began his professional life in the late 1970s doing black and white portraits for the New Musical Express; he recently created an in-store installation for Issey Miyake in New York City. Wright resists categorization. He is a one-off.

MAPPING THE TERRAIN:  FASHION  BY FAYE DOWLING  Four individuals who are expanding the rich visual codes of fashion in four different way. Varoom contributing editor Faye Dowling looks at the work of David Downton, Bela Borsodi, Marcus James and Mat Maitland. All four work in a highly individualistic manner that would be next to impossible without the patronage of the image-hungry world of fashion. When it comes to radical visual expression, fashion has the money and the will to make it happen.

THE GREENING OF ILLUSTRATION  BY JODY BOEHNERT  Does illustration have a role to play in ‘the biggest challenge our civilization has ever had to face’? Designer and writer Jody Boehnert observes its ability to communicate key issues surrounding the climate change debate more effectively than scientifically biased prose; but she also notes its unscrupulous use as an agent for greenwashing.

BJORN COPELAND:  THE FANTASTICAL POTENTIAL OF OBJECTS  BY ANNA GERBER  Bjorn Copeland is a member of cult American psychedelic rock band Black Dice.  He has designed the band’s distinctive album covers, as well as producing a substantial body of work, which is regularly shown in galleries. As writer, designer and educator Anna Gerber notes, it all began with acid-dropping babysitters.

WHAT’S WRONG WITH A GOOD PIECE OF STRAIGHT ILLUSTRATION?  ILLUSTRATORS: THE AOI’S HOUSE MAGAZINE  BY ADRIAN SHAUGHNESSY  The AOI has been protecting and promoting the interests of British illustrators since its inception in 1973. This role has rarely been commentated on, but the Association’s journal, Illustrators, published in the late 1970s and 1980s, provides an engrossing insiders view of both the AOI’s evolution, and of illustration in general.

HEATED DEBATE:  IS ILLUSTRATION A BIG  ENOUGH PROFESSION?  BY STEVEN HELLER  Writer, art director and long-standing champion of illustration, Steven Heller argues that commercial illustration has reached a critical point in its evolution. Heller notes  that there are more illustrators than ever before. But his concern is not with quantity, but with quality. As he notes: “I have grave doubts that illustration as its been practiced for decades – the one-off image used to illuminate an author’s text or sell an advertiser’s product – has any  gravitas whatsoever.”

THE COMPELLING IMAGE  CHOSEN BY SHANE WALTER  As the director of moving image festival onedotxzero, Shane Walter has established it as one of the key events in the global digital calendar. Here he chooses a 20th century classic that enflamed his imagination as a child and which remains with him as he travels the world as one of the pioneers of the new digital culture.

REFUSAL TO AGREE : A VISUAL ESSAY BY BEATA SZCZECINSKA  Polish born illustrator and graphic artist Szczezinska, working under the name City Abyss, presents a graphic interpretation of the words divide, differ, discord, discrepancy. She ‘tells a tale’ about consciousness and self-awareness; she gives us a story which shows a ‘refusal to agree.’ http://cityabyss.com/portfolio.htm

WHO I THINK I AM  Compendium #5: An Interactive Book to the Online Periodical  www.thisisamagazine.com  Book reviewed by Lydia Fulton