Abi Langridge, aka PAPERFACE won the first ever SAA Agents Award for New Talent. She has been mentored by an SAA member agent for six months. We asked her how she’s been getting on…

Can you tell us a bit about yourself and your practice as an illustrator?

After graduating from Graphic Design at Leeds University, I spent 7 years working at a design agency before deciding to go freelance in order to concentrate on illustration. Since then I’ve been working on building up my illustration portfolio – mainly focusing on personal projects – which have allowed me to mess around with different brush techniques and textures.

Can you explain a bit about the work you entered to the World Illustration Awards, and why you chose to enter this project?

After watching the BBC documentary series ‘Dynasties’ (and feeling equal parts mesmerised /emotionally drained after each episode), I wanted to create a piece of work that celebrated these animals and raised some awareness of their endangered status. I chose the painted dogs specifically because they’re striking and pretty bad-ass – and not the typical poster children for conservation. 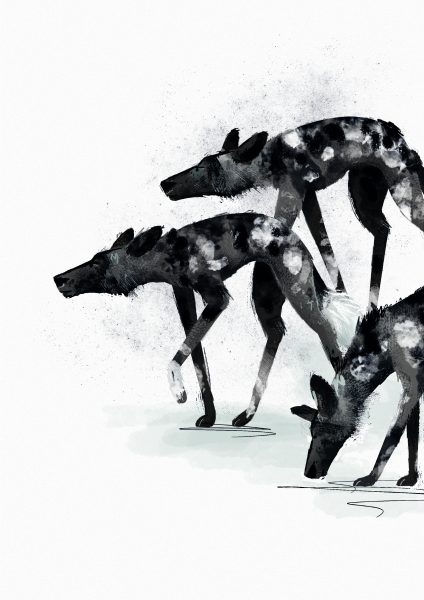 How has winning an Award developed your practice/career?

Winning the SAA Agents Award has opened up the opportunity to work with a fantastic agent as well as gain invaluable mentorship and support. As a graphic designer trying to make the leap to full-time illustrator it means everything to my career and couldn’t have come at a better time.

I would say don’t overthink it and don’t worry if the work isn’t for a big client – the piece I submitted in the end was a personal project I felt really passionate about – if you feel fired up by the work, go for it!

Can you tell us about any forthcoming projects or your future plans?

I’ve just signed my first contract with Illustration X and feeling very excited for what’s up ahead.

Is there anything else you’d like to add or tell us about?

I’m still absolutely blown away to have received the Award! It was a real privilege to be part of the WIA exhibition and the support I’ve already received has been absolutely brilliant.

Enter WIA2020 by 18 February to be in with a chance of winning this year’s SAA Agents Award for New Talent.