Carol Adlam won the Professional Research category at the World Illustration Awards 2018. Here, she tells us about her work as an illustrator, the impact of winning, and some exciting new commissions!

Can you tell us a bit about yourself and your practice as an illustrator?
I’ve been working full-time as a writer and illustrator for the past five years, after a mid-career change – I was a university lecturer in an entirely unrelated subject, but always loved illustration, and comics, and storytelling generally. So I took the plunge, retrained via a Masters in Children’s Book Illustration at Cambridge (Anglia Ruskin) and since then I haven’t looked back. I specialise in narrative/book illustration (children’s books, graphic novels, reportage), and I work a lot with museums and archives, as well as general editorial clients. I’ve been lucky enough to be Artist-in-Residence or visiting artist at some wonderfully interesting places, from the National Army Museum to The National Archives. Teaching is also a core part of what I do: I’ve given workshops and masterclasses at the House of Illustration and the Hay Festival, and I now lecture in Illustration at Nottingham Trent University on their BA Graphic Design and MA Illustration programmes. I can safely say that illustration has taken me to behind-the scenes places and introduced me to interesting and talented people I just would never have encountered before. There’s never a dull moment! 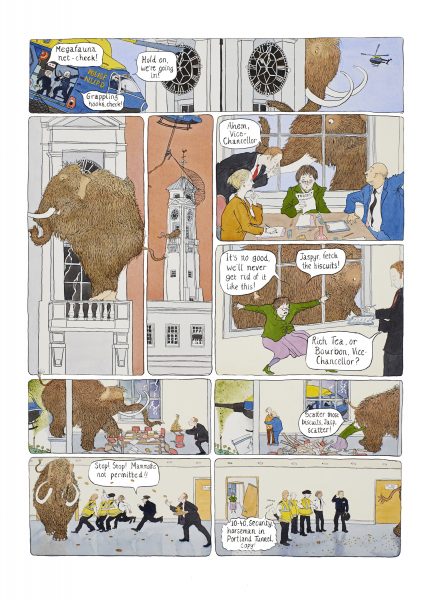 Can you explain a bit about the work you entered into the WIA2018 Awards, and why you chose to enter this project?

This project was called Thinking Room, and I did it while I was Artist-in-Residence at Lakeside Arts Museum of Archaeology, Nottingham, in 2017. They have great collection there that is very much bound up with the history of the place and the region going all the way back to a Roman times, but also including the more recent history of the University where the museum is located. I was shown a collection in the museum’s store of hand-drawn pen and ink drawings made by the museum’s founder in the 1930s – pages and pages of tiny, delicate drawings of the monsters and chimeras that decorated the Roman pottery he discovered – and as soon as I saw these the project took off! Before I knew it I was making ridiculously large pages (5 foot x 5 foot) of a graphic novel in which beasts and monsters and objects from the museum – from sphinxes to mammoths to ichthyosaurs – come to life and roam around the campus, because a small girl has, unknown to anyone, turned a key in the museum’s malfunctioning palimpsest machine. The story comes full circle when the girl is told to stop fiddling with the key, but things are not quite as they are…   I also did a set of reference paintings of the various objects in the museum that inspired the story and that are scattered throughout the larger images. So in the end the project had two outcomes – a 3-month exhibition of the large pages and of some of the smaller paintings, and a book made up of a graphic novel-style fantasy narrative (the very large paintings), and an appendix of visual footnotes that provide factual information about the objects in the museum.  The idea was to cast some new light on the museum’s collection, and to broaden its appeal to as wide an audience as possible, which I hope I did.

How has winning a World Illustration Award developed your practice/career?
It’s early days, but I was very pleased to have been commissioned by the Slow Journalism company to do a long-form graphic narrative for their quarterly print magazine Delayed Gratification, which revisits news stories from the previous quarter and explores them in depth. The story is about the Thai Cave rescue in June 2017, and it was published in the November issue. The challenge was to do this given that there is little visual evidence of what happened in the cave – apart from some blurred mobile phone footage. So it gave me a chance to really think through what it might have been like and to convey that visually. I was thrilled to be asked to do it – it’s the first time DG have commissioned an illustrator to do this sort of thing. I’ve also just finished a series of illustration for The Guardian for their Illustrated Cities section (out this week) – I’m sure the award helped with that, too. On top of that I’ve been able to develop some new collaborations with old and new clients, and it never hurts to say you’ve won an AoI award when doing that!

What would your advice be for illustrators who might be thinking about entering this year’s Awards?
Go for it! It’s really good to think about your work in this way, and it helps you focus your material and understand where your work sits in relation to others. I entered twice before (in 2015 and 2016) and was shortlisted both times, and that gave me a real boost and encouraged me to keep going. Being an illustrator can be a lonely business, so it was great to go to the awards evening and meet some fellow illustrators, and to see all the fantastic and exciting work that other people are doing as well.

Do you have any upcoming projects, and what are your future plans?
Yes, lots. I’m writing and illustrating my own books, and I also have plans afoot to do with lost nineteenth-century detective novels texts and visual adaptation, as well as a project on migration. I can’t say more about any of these but I’m very excited about it all. So my plans are just to carry on writing, illustrating, and teaching as much as I can (oh, and to have a rest from time to time!).