Kathryn is an international award-winning illustrator, writer and university lecturer based in London. She is a keen researcher in theatre and performance history, with a passion for ballet of the early twentieth century. Kathryn studied Illustration at the University of Worcester and then Visual Communication at the Royal College of Art. Since graduating in 2015, her work has been shortlisted for and won several national and international illustration prizes, and has been exhibited internationally in Europe and Asia.

I have been researching theatre and performance history for nine years. This originally started out as a hobby, kick-started after visiting the incredible Diaghilev and the Golden Age of the Ballets Russes exhibition at the V&A Museum in 2010. More recently I have wanted to share the stories of dancers and choreographers through my illustration and writing.

To create an informative illustration showcasing the life and career of dancer and choreographer, Isadora Duncan, a pioneer of modern dance, and an icon of influential female artists of the early twentieth century.

Isadora Duncan was tragically killed when the scarf she wore become caught in the mechanisms of her car, which strangled her. This was a dramatic end to a dramatic life and career. I decided to tell her story on this flowing material as she set out on that fateful journey. I already knew some information about Isadora Duncan from my ongoing research, but to learn more I read books and listened to radio programmes about her. I also studied photographs and relevant artwork from the early 1900s in order to achieve the likenesses of her, her partners and her children in my drawings, and to make sure details such as the car and the patterns in my colour work were historically accurate.

The colour and pattern work was created using oil pastel sgraffito, carving into multiple layers of oil pastel to reveal different colours. The actual images were originally created with ink before I incorporated the colour and texture work to them digitally. 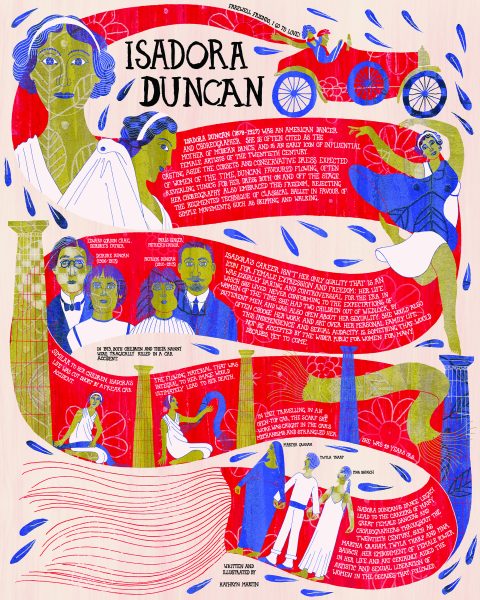 All of my line work and colour textures were created independently of one another, and then brought together using Adobe Photoshop. Even the text was handwritten before being incorporated onto the scarf.

The gold texture was created using a beautiful gold oil pastel. It’s a shame once scanned and printed it loses the shine of the original texture, but it still has a richness to it that no other colour could bring.

The most time consuming aspect of this project was making sure the text aligned with the scarf and fitted neatly around the images. The text was all handwritten, and I spent days rotating the odd letter here and there to create the curve of the lines. It really is time I made a typeface of my handwriting!

Whilst making this piece I was also lecturing at the University of Worcester, where I currently work on the BA(Hons) Illustration course. Preparing for lectures and travelling from London to teach takes up a lot of my time during the academic year, so there were quite a few late nights and weekends spent working on this project.

This was one of those dream projects that seemed to make itself. As soon as I had the idea of telling Isadora Duncan’s story on her scarf, I knew almost exactly what I wanted to do with the project, and I hope I was able to achieve it.

If you are passionate about something, incorporate it into your illustration practice, be that narratively or just through visual inspiration. It doesn’t have to be within the realms of illustration, or even within the realms of the arts, but you must be dedicated to spend enough time learning about the subject in order to create something fresh, and with integrity. If you are willing to do that, I promise you will get there in the end (even if, like me, it takes close to ten years!).

I would like to dedicate this piece to the memory of Janice Plampton (Miss Todd), who was my dance teacher when I was growing up. She very sadly died at the age of just forty-eight in 2004, but her influence on me and I’m sure many others is still felt today. She helped start my passion for dance, and for that I am so very grateful.