Astrid Jaekel is a freelance illustrator and design school tutor based in Edinburgh, Scotland. She is best known for her bold and playful mixed media artwork and large-scale, cut-out silhouettes, featured as temporary or permanent site-specific installations, often involving stories from local communities.

Five years after my first project for the Wigtown Book Festival, I suggested decorating the town square for the festival’s twentieth birthday using large-scale street art. I was ecstatic (and nervous) when they gave me the go-ahead. Decorating a whole town was a once-in-a-lifetime opportunity for an artist, but it was a gigantic task. I had to do nearly everything on my own, from calculating a budget to admin, to gaining approval from homeowners, to creating all the designs, and to installing the wallpaper (though that part was undertaken with the help of a few helpers). 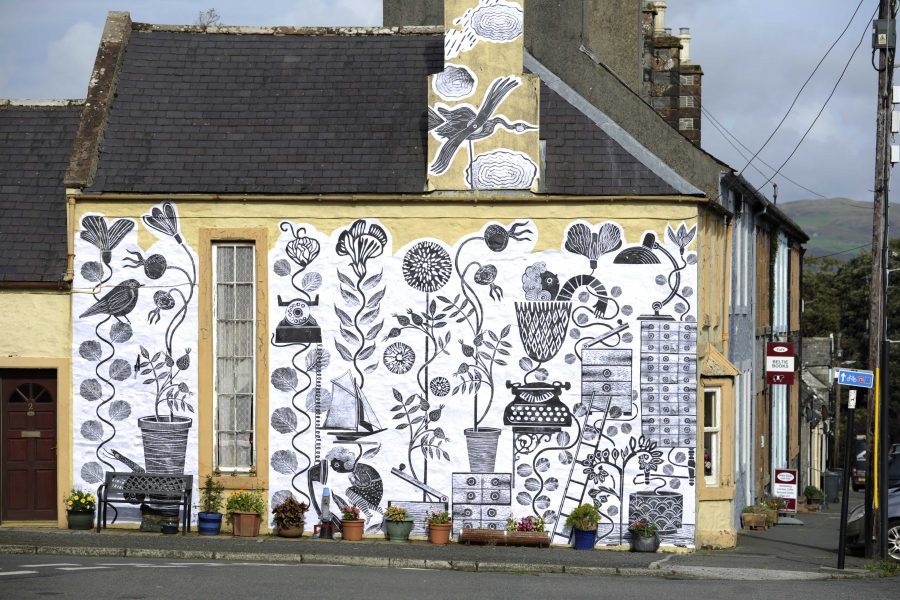 Artist Wallpapers Outside of Wigtown Buildings for 20th Festival Celebrations

I wanted to shine a spotlight on Wigtown and its residents. Many of the townspeople have played a huge part in the festival, as volunteers, year after year, so I made the project about them and the town as a whole. Visitors always find the town charming, but they never really get to know the town. I wanted to encourage visitors to see the place as more than just a charming festival town.

I began by going door to door to learn a bit about the buildings and find residents who might like to participate. To my surprise, everyone I approached was supportive, even though most weren’t familiar with street art. I also researched wallpaper patterns, materials, and the installation process. I was also incredibly lucky to receive support from my friend, Irish street artist Joe Caslin, who flew over to share his expertise at the beginning of the installation. 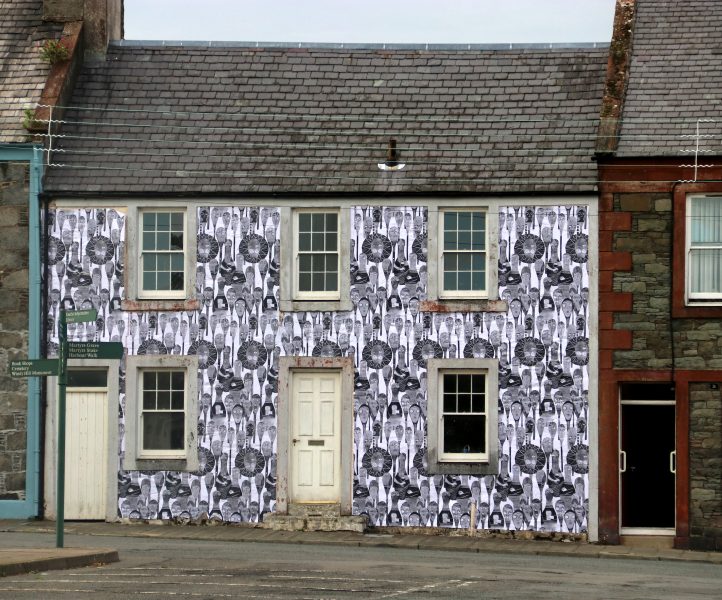 It was exciting to go door to door and learn the story of each building, and how the building tells the history of the town and all the people. I turned these narratives into repeating patterns, and then I wallpapered a total surface area of around 700 square meters, using a scissor lift to get up to a height of eight meters. My team and I worked late into the early hours of the morning while being exposed to all sorts of weather. It was definitely a good, physical challenge.

Apart from an initial fear of heights, and working around electricity cables, Storm Ali was our worst possible enemy. It decided to pay Wigtown a visit just after we had completed installation, which meant some of the wallpapers fell off or were in tatters. We had to re-print and re-install some of the work. Afterwards, the work remained on the buildings for a couple of months before being removed.

I learned to overcome a certain reservation about how older generations may perceive street art, which is often associated with youth culture and not the Scottish countryside. The age demographic of Wigtown is a good bit older than in most urban areas. Fortunately, the responses were almost entirely enthusiastic. I discovered that the majority of the people were open to new ideas, and that they take delight in playfulness, humour and stories. I also learned a lot about the anatomy of drain pipes and window frames and that wallpapering pebble dash is particularly satisfying.

The installation of work coincided with the beginning of the semester at Edinburgh College of Art, where I teach illustration part-time. It meant having to travel back and forth. Getting to Wigtown can be a bit of a challenge. 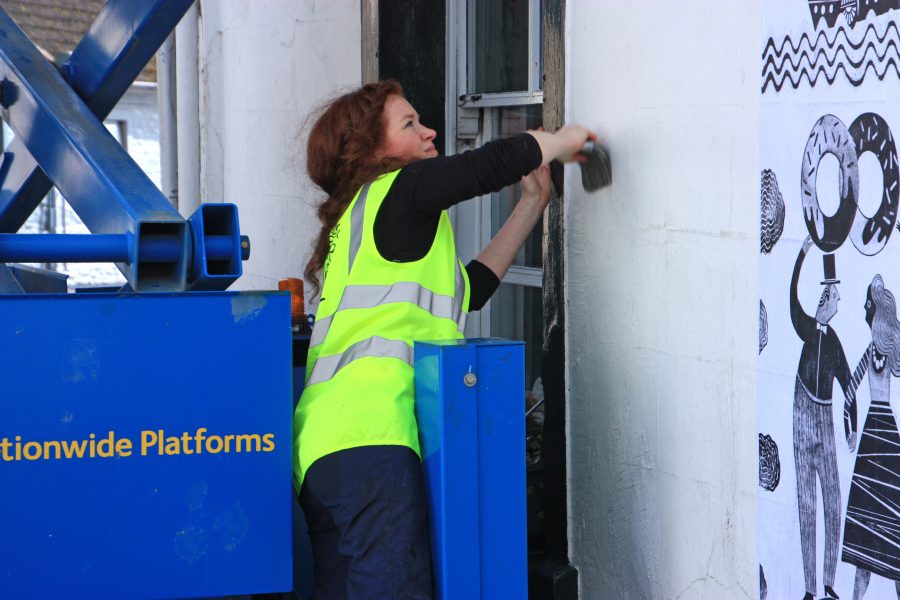 One of the questions I was asked in advance of the project was, “Have you ever done this before?” The answer was simply, “No, I haven’t.” At that point, I knew very little about applying paper to interior wall spaces, let alone the exterior. It was a crazy learning curve, but now I can approach a similar project with much more confidence.

I have always found it important to balance commissioned work with self-initiated, heartfelt projects. The skills of an illustrator — working to a brief, with people, making things — can be broadly applied. I like to challenge myself to use my skills in new ways and discover where else my work can take me.

I would just like to thank the people of Wigtown for being such a supportive community for lending me their town square as a canvas, and the Festival Company for giving me this incredible opportunity to further my practice. For anyone who hasn’t been up to Wigtown, visit this wee town if you get a chance!

Astrid’s work is on display at Somerset House until 28 July, and will then tour the UK into 2020.