Why did you make this work:
I was given the phrase "Mi abuela tiene un caballo blanco" to implement into the image and work around in Diné, English, and Spanish. The book festival and poster are supposed to attract under-served children in New Mexico.

How was the illustration used:
Posters, Banners, Print Adverts

How did you make this work:
I decided to add a flying woman with an oud as a reflection of the lyrical history of poetry and literature. The white horse is looking on as the children read, and the Zia symbol on the building is included as a distinct symbol of New Mexico. Children from Albuquerque's three poorest neighborhoods were given backpacks and spending money to buy books. I was proud to create work for this festival.


Biography:
Zahra grew up in two deserts which vary drastically and have many similarities in culture. One close to the sea, the other close to the mountains. She studied the visual arts in France, and continues various pursuits to further educate herself. She currently lives in the Barelas neighborhood of Albuquerque, New Mexico, and works in her studio at the Harwood Art Center, where she incorporates Kuwaiti tendencies into her daily life. 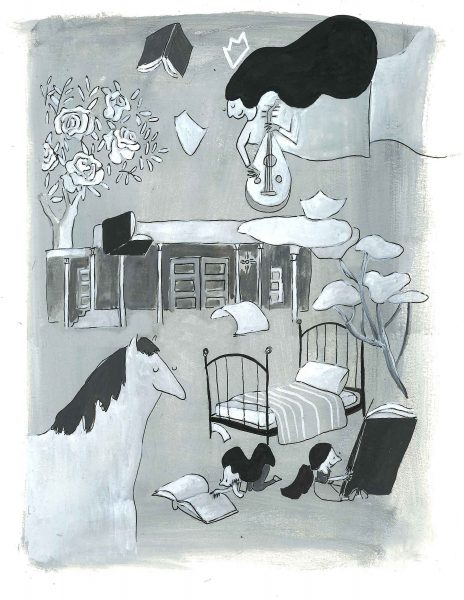