Why did you make this work:
The Illustration piece is a story about an Egyptian Prince and a Japanese Princess who were once deeply in love. However, they were separated by their parents' disapproval. Despite the disapproval, they find each other and reunite.

How did you make this work:
I am very interested in ancient Egyptian art and Japanese art. I figured that both have similarities in terms of the flatness of the image. Inspired by the Egyptian Wall Art and Japanese Ukioy-e, I created a piece that merges two forms of historic art.


Biography:
Yubin Lee is a Korean New York-based artist studying Illustration at the School of Visual Arts. She specializes in Illustration, Graphic Design, Comic, and Animation. She is currently working as an Illustrator/Designer at China's Women Film Festival in Beijing. She creates promotional posters and illustrations for film-related events partnered with European embassies. 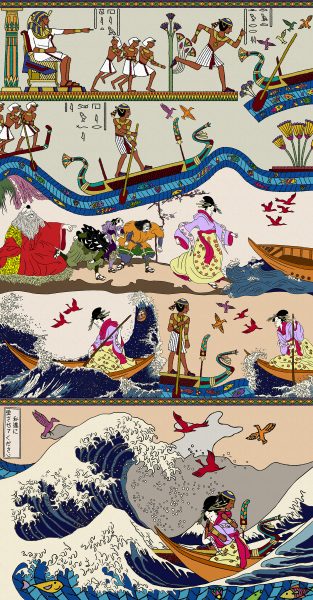