Process: Sketching and Measurements – I started off with a thumbnail sketch which was then refined into a scaled down final line drawing and also a birds eye view drawing. After that I measured all objects and the platform they sit on from both drawings to get all of the 3d dimensions. These dimensions were scaled up which give me the measurements for the final physical sculpture.  Colour Palette – I chose the colour palette using G.F Smith paper. Once I had the final colours I filled the colours in digitally to check what worked best.  Accurate detailed drawings and templates –  For good accuracy I drew buildings on Adobe Illustrator, opened the design up in Silhouette Studio. Tabs and score edges were added ready to be cut out on the cutting machine. One off unique shapes were drawn and cut out by hand.  Most objects were cut out on scrap white card to allow for mistakes and final refinements before they are all cut out in neat. The base and landscape required a bit more thought because it needed to be a steady structure which held everything together. The base consisted of a simple 3d shape made out of foam board which could easily be cut into or extended in areas. In this case I used a basic cake tier formation and I cut into the part underneath the Clifton Suspension Bridge where the water flows down. I added each building to the base then LED lights were carefully threaded through the sculpture to create a warm and inviting glow.

Brief Requirements: It’s hard to get a festive campaign to stand out at such a busy time of year, harder still when you have so many different stakeholders to please with limited coverage. This was the challenge faced by the team at Visit Bristol who represent all of the hotels, visitor attractions and shopping centres in the UK's most vibrant city.  Peloton Design was tasked with creating a campaign that could say as much about the city’s character, as it did the plethora of festivities on offer.  My brief was to create a festive sculpture of Bristol depicting Bristol's key attractions to promote Bristol as an exciting and magical shopping destination around the Christmas period.

Key Brief Ideas: My initial thoughts were to brainstorm ways of making this project stand out amongst everything else in the busy festive period. I had a meeting with the commissioner and client and where one would tend to think that such a vibrant city should have a colourful campaign, we all agreed to do the opposite in a bid make this project stand out. This was quite new for me because most of the colour palettes I work with are vibrant and multi-coloured.   I decided to go for muted white / warm champagne colour palette using G.F Smith papers. I chose about 9 different papers some which had shiny ice-like textures, one that was made with real cement and then others with lovely matt textures.   I thought this white city sculpture would really pop out in front of a dark starlit sky. If it was a night scene it would definitely need Christmas lights so I had to think of ways that LED lights could be introduced to the sculpture to highlight the key landmarks and give the image a nice warm and magical glow against the cooler paper colours that were used.   The client mentioned that it needed to be very clear that it was a depiction of Bristol City, as opposed to just any generic city. I was given a list of all the landmarks and attractions that needed to be included in the piece. After I'd worked out the hierarchy of each landmark / attraction (it's relevance / importance to the campaign) I was able to determine the size that each structure should be, and where abouts it should sit in the scene.  Post production was a huge part of this piece, so my photographer was involved in overseeing the actual construction to ensure that the lighting and composition would work in the final image and together we worked hard on the photography and post production stage to add the finishing touches to the piece.   I had two weeks to design and make the sculpture and also get it professionally photographed and retouched, so meticulous planning was involved to ensure everything was delivered on time. 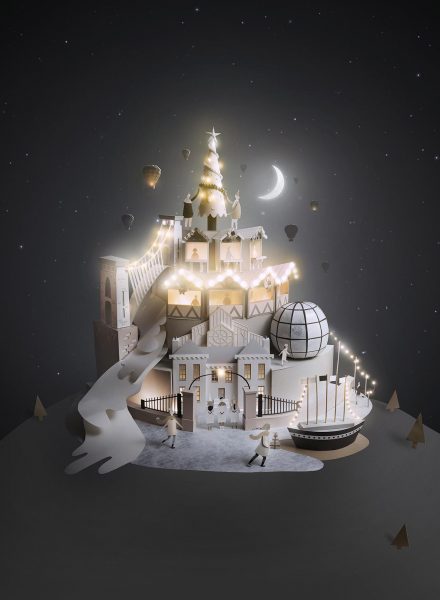