Usage: The entire range, which includes, mugs, espresso cups, tea towels, posters, books, bags, cushions, tee shirts and ceramic tiles were commissioned by the Tate for sale in the Tate shops. The products quickly became the fastest selling range in the Tate, in shop and online

Process: I was given freedom to create a series of designs for the Tate in my house style. There was no planning to the designs, they were illustrated as I drew, so each design evolved as they progressed within the shape guidelines of each product.

Materials: Pen and ink on paper. Once drawn the artwork was scanned high resolution and sent to production as a vector file ready for print.

Formats: I illustrate using Faber Castell Pitt pens onto trace paper. The pens do not bleed or smudge, and the ink flows well across trace.

The illustrations are all freehand drawn. Once finished the artwork was scanned and converted to paths/ vector files in Illustrator. I always do this for print work as the line is perfect and captures the detailing that I use in a precise way.

Brief Requirements: The client, the Tate, came to me and asked if I would like to create a London poster for sale in the Tate. I was given freedom to come up with the design as a map of sorts, the one proviso being the Tate should be emphasised, through type or illustration or both. Initially a poster was created, which launched and quickly sold out, time and time again. With the success of the poster, Tate Enterprises asked me if I would like to create a range of agreed high end products that would sit alongside the poster. With a similar theme of London and the Tate at it’s heart.

Key Brief Ideas: The initial poster design was important in that it had to celebrate London. Rather than just place names, I came up with copy, that for me represented the different characters of London areas with a charming wit. As the project grew, each product was individually illustrated, so each object had its own personality and was not a repetition of the same design. With the launch of the new extension at the Tate Modern, it was important to celebrate the building and London and to appeal to both Londoners and visitors alike. 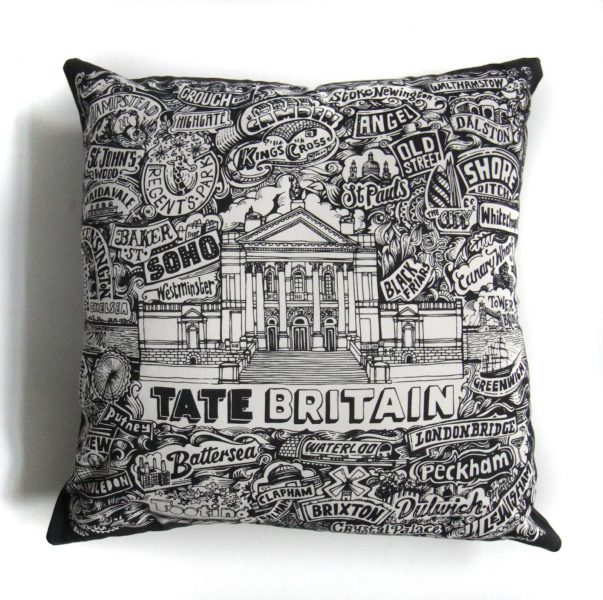