Process: A rough sketch was drawn to decide the whole angle and layout. After getting the client's:OK,: the thickness of the lines was decided and the real lines were drawn. Then Coloring to the finish./Photoshop

Brief Requirements: In preparation for International Women’s Day, we launched the print campaign titled ‘Finding Her’ under the umbrella of UN Women’s global campaign ‘Planet 50-50 by 2030-Step it Up for Gender Equality’  which calls upon governments to make national commitments to address the challenges that are holding women and girls back from reaching their full potential.  The main objective behind the campaign is highlighting women’s persistent low labor force participation rate and the importance of supporting an enabling environment for young women and women to become economically independent.

Key Brief Ideas: The campaign consists of three print advertisements where the audience is challenged to find the only woman in different workplace settings including technology, politics, and science. The main message behind the campaign is to shed light on the importance of equal opportunities for Egyptian women to participate in the labor force and contribute to the development of the Egyptian society. 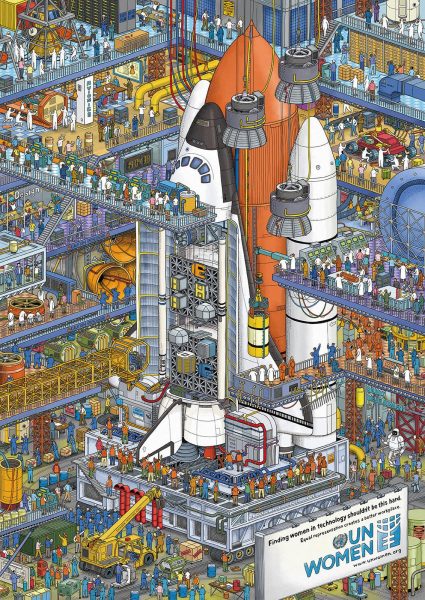