Why did you make this work:
I was invited to collaborate on the popular video game franchise - Far Cry. The game is set on an imaginary Caribbean island, with players taking on the role of a guerilla fighter attempting to overthrow an evil dictator. The diagrams I created help players build weapons from discarded found objects. One of the main challenges was dreaming up mundane and bizarre origins for each weapon component.

How was the illustration used:
The work was used within actual gameplay as documents that players could discover. It was also used on promotional merchandise and part of a wider social media campaign to promote the game.

How did you make this work:
The diagrams had to feel like they had been produced by a guerilla fighter with access only to very limited and antiquated printing technology. To achieve this weathered aesthetic, the drawings were initially created in Adobe Illustrator, then printed out and scanned back into Photoshop where they were coloured and composited together.

Biography:
Tobatron is the alter ego of London based artist - Toby Leigh. He has published several books and is a regular contributor to publications such as The Guardian, The Times and The Independent. In 2017 he won Gold prize in the World Illustration Awards and was also shortlisted in 2018. His work has been accepted into the permanent collections of the V&A and the Met Museum and MOMA in New York. 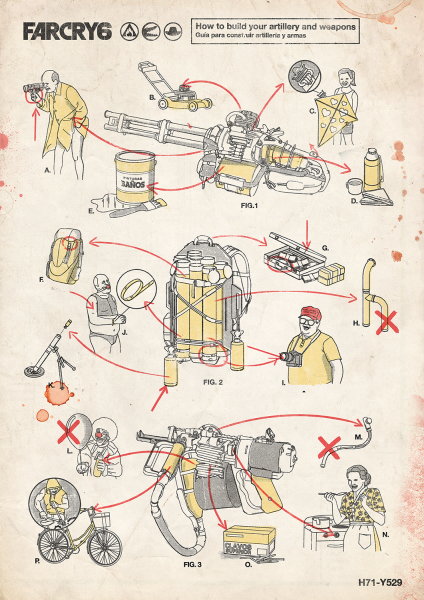