Usage: Created for WDR’s Funkhaus Europa and published in countless newspapers, magazines and blogs all over the world.

Process: The idea sketches were done with pencil on paper. A detailed sketch of the chosen idea, done in Photoshop, held as the reference to the final artwork, which was created with Affinity Designer.

Formats: My goal was to create an image that communicates instantly. Several skeches showed that the Statue of Liberty should be seen from front while Trump is still recognizable from behind. It even adds to the image that we do not see Trumps facial features, which could destract the viewer from the message.

Brief Requirements: The WDR wanted to publish a visual comment in case of a Trump win. I was given absolute freedom.

Key Brief Ideas: The idea of Donald Trump groping the Statue of Liberty, came the day after the Hollywood Access Tape was leaked. In my eyes the Statue of Liberty works here as a perfect metaphor, as she symbolizes (next to her femininity) liberty, equality, freedom of speech and immigration. Core American values which Trump demonized throughout his campaign. 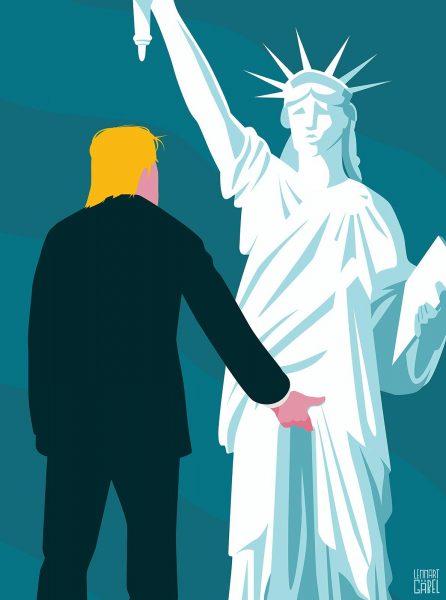