Usage: This project was created in November 2016 as part of the Support Plan for Refugees of Malaga University together with Amnesty International and La Guarimba Film Festival.  I was invited to make a mural and teach refugees and students of the Fine Arts Faculty the process of making a mural. The idea of the project was to help integrate refugees with locals and interact with the space.  The mural is located in one of the exterior walls of the Fine Arts Faculty of Malaga University.   It represents faces of people of different cultures as a metaphor of the sea. The Sea that keeps us apart is the same one that keeps us together.

Process: I started by the idea of the sea. The sea that keeps us apart is the same one that keeps us together.  Since May 2016 I have been in contact with different refugees camps. I have had the opportunity of listening to so many stories of crossing the Mediterranean in the search of a better life in Europe. For those who make it the trip doesn’t finish once they touch European lands because they find another sea once they are in Europe, a sea of indifference and another reality.  These thoughts I decided to transform them into lines. For me the best idea to represent it without being so literal was to draw as many faces as I could, different people from around the world and some lines that would represent the waves of the sea. The goal of making different faces without drawing a sinking ship or drowned people in the Mediterranean was just to take the positive aspect of immigration that would be the diversity of cultures. That the people who passed in front of the mural would feel like they are also part of it.   The most difficult part of the process was to decide what to draw and to explain the process to the students and refugees. I had to make sure that they knew each other, talked to each other and felt confident holding a brush. I only had two days to work on the mural so I had to be fast and very effective.   The process was simple:  1- Draw with the brushes the faces. 2- Explain the process to the participants. 3- Let them follow some of the lines, or fill blank spaces.   The difficulties:  1- When it comes to murals I like working freely. If I make mistakes I easily correct them by slightly changing the sketch or trying to make the mistakes look as part of the mural. Working with other people that had no experience painting I had to let myself go and share the workspace so others could learn from me. The most difficult part was letting my stress for perfection aside so others could enjoy the process and actually learn from it.  2- One of the goals of the project was to help refugees integrate with locals. I am a shy person so once again I had to come out of my comfort zone and play the role of the one that introduced everyone and made sure they felt comfortable with each other. At the beginning everyone was shy but at the end of the day the participants ended up talking very loud to each other and making jokes. In the morning they were all working with a lot of distance and in the afternoon they made sure they were working close together so they could chat.  3- I only had two days to make 18 meters of mural, explain everyone the process and make sure they knew each other. The colors: In this mural I decided to use only black and white so the expression of the drawing and the lines of the faces would have all the attention.

Brief Requirements: Create a mural in the façade of the Fine Arts Faculty of Malaga University to explain refugees and students the process of making a mural and to give them the opportunity to know each other in the process.

Key Brief Ideas: Since the mural was part of a project to promote integration and awareness about opening doors to migrants and integrate them in society I decided to paint a sea of multicultural faces.   I made a list of words that I thought were important for the process: Migration, Refugee's crisis, Mediterranean, Integration, Cultures, The Sea. I decided the mural was going to be all black and white because like that lines have a more relevance than color so it can be more expressive and immediate. 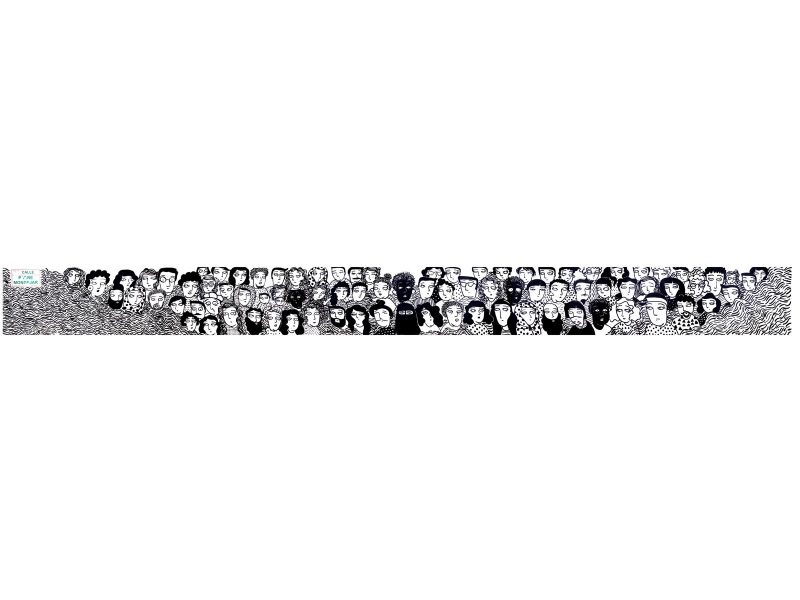