Usage: I was asked to hand letter almost 4000 author names to adorn the walls of the central lift lobby wall and stairwells of Carmelite House, headquarters of Hachette publishing house in London.

Process: The lettering was hand drawn using brush pens. It was then scanned and vectorized and then each word was machine cut out of vinyl before being applied to the walls.

Formats: Pen on paper then scanned and vectorised and cut (by 3rd party) out of vinyl to be applied to walls

Brief Requirements: I was given a list of author names and I had to come up with a way to translate the list into a giant mural which wrapped around 5 floors and a stairwell of Carmelite House. The illustration was to echo the riverside location in some way and show how the seven publishing divisions within Hachette have grown and merged over the past 100 years.

Key Brief Ideas: The Thameside location of the building was key to my interpretation of the brief. The vast central lobby running through 5 floors of Carmelite house has very stark lines and many reflective glass panels so I wanted to break this up with my interpretation of the mighty river. In contrast to the architecture, my design forms a flowing river shape which grows from the trickle of Hachette's origin in 1800s to a wider, fuller river of names. I chose brush lettering to echo the idea of authorship and hand writing and I used subtle watery colours to pick out the different companies within Hachette. I scaled the lettering up to show specific authors who were particularly successful or significant. 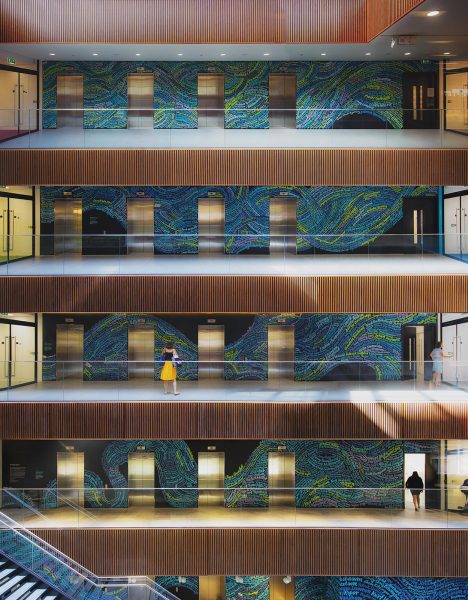