Usage: The Medium Man is a series of single page graphic novel stories. They currently exist digitally, having been composed from original artworks and the plan is to release a volume of 50 in a limited print run.

Process: All lettering and illustrations created by hand, drawing with dip-pen, brushes and Indian ink on paper, scanned and composed digitally.

Formats: Drawing on A4 sheets, one frame of the graphic novel per sheet of A4, scanned and resized/laid out using photoshop.

Brief Requirements: I like to observe human behaviour and characteristics and I grew up a huge comic book fan. Instead of creating a larger than life superhero, I wanted to play with the idea of someone who exists in all of us. Much like David Brent resonates with most people who have worked in offices, I wanted to reference my early-thirties and create the medium man; that part of us who wants to stay in when you should be going out. We all know The Medium Man. There's a bit of him in all of us. He's not overly fussed, going to give it a miss tonight and he'll do whatever is easiest. Don't mind him, he wouldn't like you going out of your way or anything. The Medium Man is not hurting anybody, he's just existing in a three-bed South London apartment, keeping her happy and ogling at the GQ watch advertorials on the tube home.

Key Brief Ideas: TThe idea was to play with the anti-climatic nature of The Medium Man’s real-life, modern man, mundane narrative to tease the reader with a lead in suggestive of something bigger. My hope is to bring very common, very every day settings, habits and feelings to the forefront of the readers mind and in doing so, either make them laugh loudly, or feel terrified that they share a little too much with The Medium Man. 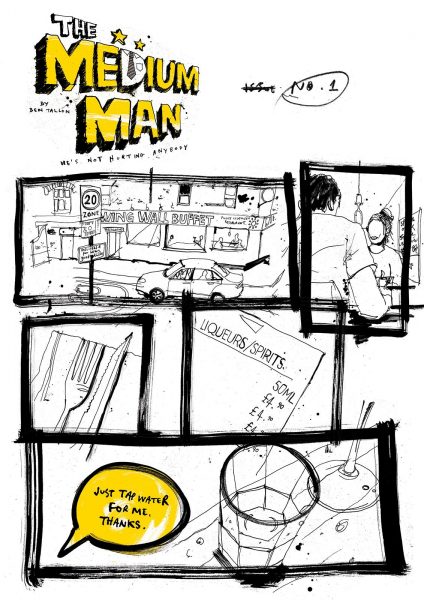