Usage: The submitted illustrations are all taken from my second picture book as author/illustrator 'The Lumberjack's Beard', published by Templar Books. It is set in the grandeur of the North American Rockies and centres on a well-meaning lumberjack who needs to right some wrongs after inadvertently making several forest creatures homeless by chopping down trees.

Process: The final artwork was drawn and coloured digitally using a Wacom stylus and cintiq. I first drew the layered compositions in Adobe CC Animate*, before exporting to Photoshop to add brush highlights and textures. Any shadows or patterns were hand drawn then scanned into the digital composition. All preparatory artwork, such as character designs and composition layouts were hand sketched on paper. *I have worked in animation for 15 years and find Animate (formerly Flash) the most intuitive vector art software when drawing freehand. (I have yet to find another illustrator who agrees with me.)

Materials: While the majority of the artwork is digitally composed, I used hand drawn elements for the shadows and patterns (as mentioned above) and also scans of rough hewn paper to add textured overlays to the finished compositions.

Formats: The book is printed in both hardback and paperback formats. All of the artwork also exists as layered Photoshop files.

Brief Requirements: The story was self-initiated as the second of a three book contract I have with Templar Books. The lumberjack character (Big Jim Hickory) came about after seeing Scottish rugby player Geoff Cross sporting his enormous beard. The setting and background artwork was all inspired by time I spent in Wyoming as a student several years ago. I wanted to create a story with an American cultural theme, that also paid homage to the Mid West and the Rockies, whilst promoting a message about protecting the wilderness and the natural landscape. The lumberjack character seemed the perfect conduit for that.

Key Brief Ideas: As a children's picture book, it was important to me that the narrative have a sound moral grounding without being pious. In order to achieve that I wanted to add comedic elements to the illustrations to keep the story light and fun, while not losing sight of the underlying environmental message; whether it be through the facial gestures of the lumberjack and the animal characters he comes into contact with, or subtler background details such as the vast amounts of maple syrup on the kitchen shelves. Most importantly, however, was the treatment of the landscape itself. As the story is about protecting the natural environment, it was imperative that I treat the landscape almost like a narrative character in its own right. I researched how mountains seem to change colour throughout the day; from tranquil pastel shades at first light, to deep fiery tones at sunset. I wanted to use these dramatic shifts in colour to help foster the change in mood throughout the story. For example, the calm pastel shades of the opening spread are soon juxtaposed with an unsettling, fiery orange once the lumberjack has chopped down an entire forest. 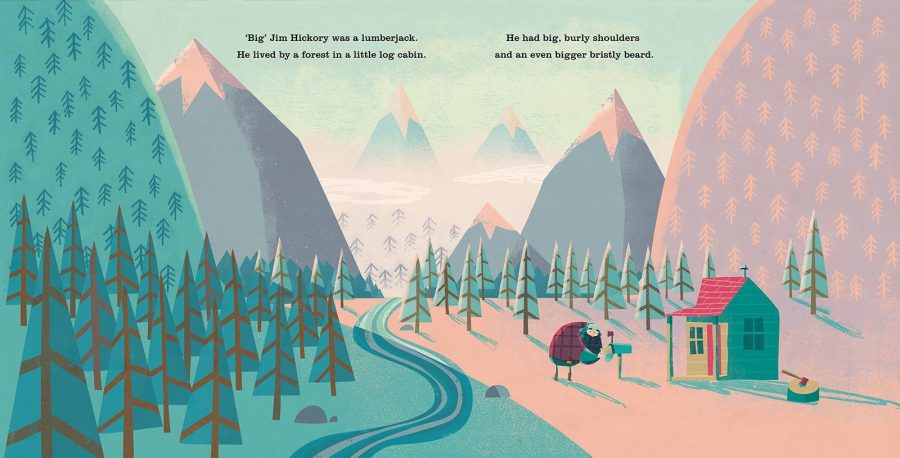