Why did you make this work:
I created this illustration to emphasise the role of sisterhood in helping the victims of domestic violence.

How was the illustration used:
It was exhibited in an event for fundraising and raising awareness for victims of domestic violence in London on the 21st of July, 2019. I donated it to the Women’s Aid Charity.

How did you make this work:
I imagined sisterhood as a blanket to protect and warm-up victims of domestic violence. I used the lotus flower pattern for the blanket to show growth can happen in pain, just like the lotus flower which starts to grow in the dirty and muddy water. This illustration was created in the Procreate app on the iPad Pro.

Biography:
Roshi Rouzbehani is an Iranian freelance illustrator based in London. She recently graduated from the University of Hertfordshire with a BA (Hons) in Illustration. She has collaborated with BBC 100 Women and Popshot Magazine among other private customers to create editorial or portrait illustrations. She has also participated in several illustrations or collage group shows in the UK, Iran and France. She mostly enjoys illustrating conceptual illustrations about women and mental health issues. She is currently working on her forthcoming book, “50 Inspiring Iranian Women”, which is an illustrated biography book about 50 extraordinary women from Iran. 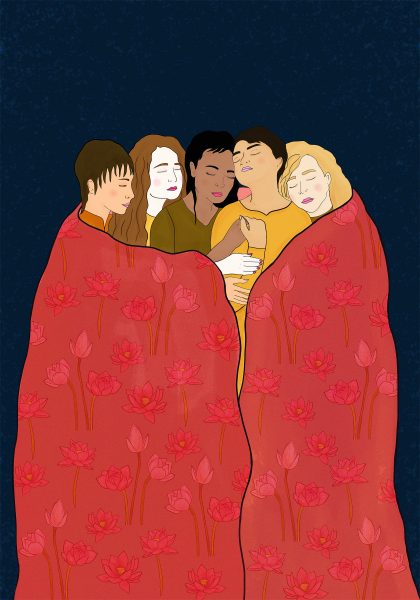