Why did you make this work:
I was commissioned by a consumer research company to make three artworks for their new office on Tottenham Court Road. As they handle statistics from cross-sections of the population, the theme was ‘diverse groups of people’. I also wanted the artwork to reflect the area local to the office and to make images that would be meaningful to the employees.

How was the illustration used:
The artworks are on display in Decision Technology's office.

How did you make this work:
After consultation with employees I picked three areas of local interest for inspiration. Many employees take lunch at Bloomsbury Market, which also attracts people of different backgrounds such as students and tourists, so it was an obvious choice. I spent time drawing and taking photographs in each location before composing the final designs using a mixture of printmaking and digital editing. 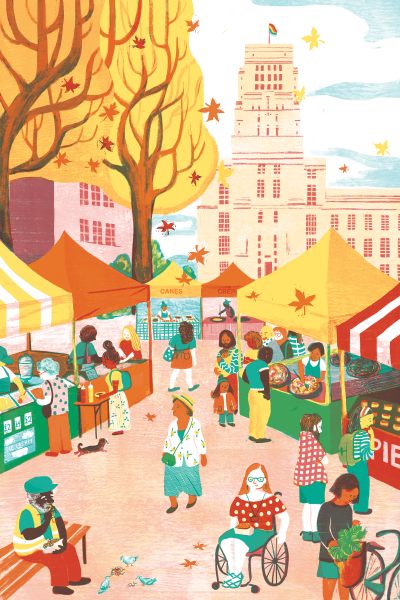