Why did you make this work:
During the first lockdown in March I found myself with a lot of spare time on my hands. I had previously created a large-scale painting for the final year of my degree and had wanted to do another one but never quite had the time for it. I wanted to create something that was a visual archive for the things that happened in my life in the previous year and during the first months of 2020.

How was the illustration used:
Personal project that acts as a lead for portfolio submissions.

How did you make this work:
As a kind of diary, I turned lists into scenes and situated them within the florals and the geometric structure that underpins the whole composition. Each segment works on its own but is also part of a larger puzzle that makes up the entire illustration. The original is painted with acrylic paints and is nearly 2m tall.


Biography:
Oliwia is a Polish illustrator based in London. She usually paints with acrylics but has recently started to learn airbrushing and has been exploring different ways of displaying her work, including AR. She has experience with editorial illustration as well as site specific, large scale paintings. 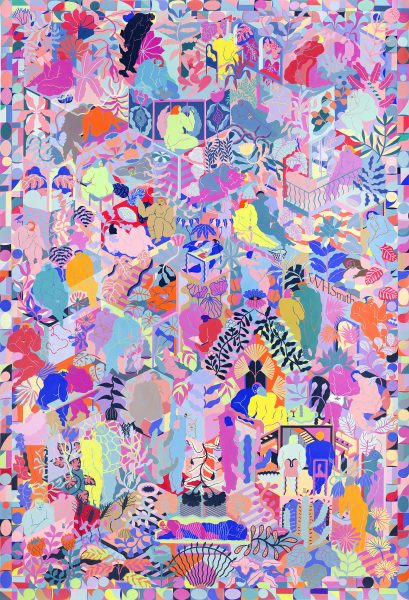