Why did you make this work:
Commissioned by Ogilvy for press Ads and online. The concept was to show that although the agents were Independent they were never alone with Nationwide, The scene feels modern with a strong female agent looking towards the eagle that represents Nationwide, the eagle is always there for her.

How was the illustration used:
Online and print advertising

How did you make this work:
The process involved three stages, initial drawn concept sketches that were then narrowed down to the correct choice, I then worked this up as a loose rough on my Wacom Cintiq pro in Photoshop CC, once the rough had been signed of I continued to add detail, shading, texture and colour, all in photoshop,


Biography:
Matt Murphy is an award-winning, British illustrator based in Dorset, UK. Renowned for his conceptual approach, delicate textures and confident colour palettes, his work is full of mystery and meaning, leaving us wanting to find out more about the characters he depicts.However, Matt's path to illustration has been interesting: he first studied photography at Reading School of Arts & Technology, graduating in 2000 before working as an assistant for photographers in London to develop his skills. But after five years of running around the capital on assignments, he soon realised his creative passion lay elsewhere, so he began experimenting in digital art and more conceptual work, building a portfolio that he shared with various publishing houses and newspapers.That shift attracted his first clients, which included The Big Issue and The Independent, and a few years later, Matt was appointed to create a cover illustration for The New York Times Magazine – a project that propelled his reputation and boosted his career as a freelance illustrator.Fourteen years later, after switching course and embracing his love of illustration, Matt is represented by Handsome Frank and his clients today include Johnnie Walker, Adele, The Guardian, Stella Artois, and Penguin Books. Matt's engaging and thought-provoking work perfectly suits editorial and literary-based projects due to his ability to communicate conceptual ideas with intelligent simplicity. From his studio in Dorset, Matt combines his two loves: nature and music. "Spending time in the sea and the woods helps clear my mind and allows new ideas to take root," he says. "Whilst music is so important to my work; it helps build the mood of the piece I'm working on and gives it momentum. I carefully select the day's listening material before sitting down to draw, it plays all day, unless there is cricket on the radio.". 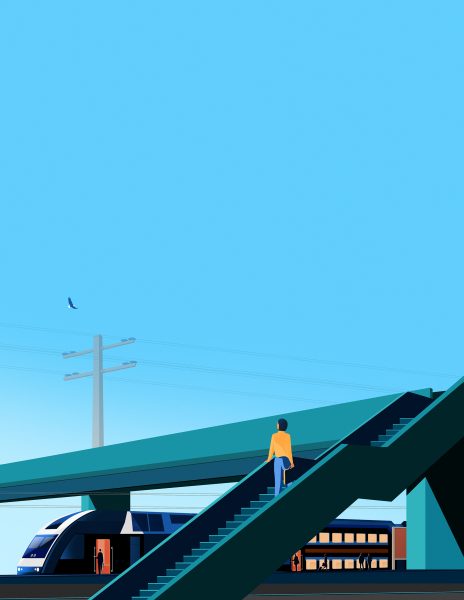