Why did you make this work:
Staten Island native Michael Ollis died in Afghanistan shielding a fellow soldier from an insurgent's suicide vest. His parents created a charitable foundation in his name, which supports veterans in need. Through their efforts, Staten Island's newest passenger ferry was named for Ollis. The foundation commissioned this poster, and all profits from its sale go to help veterans and their families.

How was the illustration used:
Posters were given to dignitaries who attended the ship's dedication ceremony. Since then, the SSG Michael Ollis Freedom Foundation has sold prints, raising more than $1,800 for veteran causes.

How did you make this work:
The ferry was not yet in New York when I started work. But I was able to use photos from the shipyard to sketch how it would look when finished. We debated whether the ship should appear against an iconic Manhattan skyline. But we decided Lady Liberty was a more appropriate backdrop, given Michael's sacrifice. The end result is a vector-based illustration designed to evoke vintage WPA posters.

Biography:
Matt Hood is a freelance illustrator living near Washington D.C. His professional life began in newspaper design. He has lived, worked and built his illustration portfolio in the midwest, the east coast and abroad, specifically in Moscow, Russia; Paris, France and Frankfurt, Germany. Each new location — and cultural immersion — has informed and influenced his work. 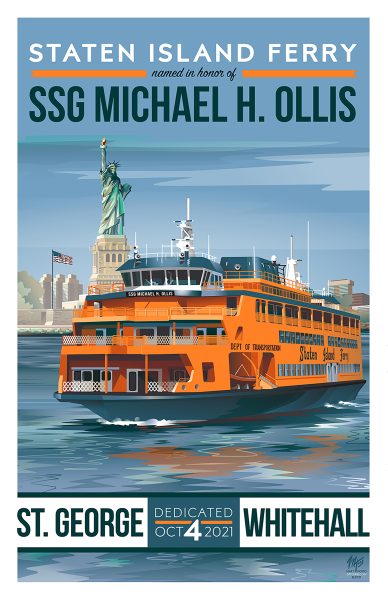