Why did you make this work:
This map was commissioned to accompany a guide to six new whiskey distilleries that had recently opened in Scotland. The map was to be filled in between locations with iconic Scottish wildlife and attractions.

How was the illustration used:
This illustration was used as a guide for whiskey distilleries to visit in Scotland for United Airlines' in-flight magazine Hemispheres. Text was placed on top of the map linking the bottle numbers to accompanying text.

How did you make this work:
I sketched out a variety of icons to place on the map and chose to colour them in Photoshop. I focused on pulling together a colour palette I felt best represented both Scotland and Whiskey. I then applied textures to the base of the map to emulate Scotland's rugged landscape.

Biography:
Louise Billyard is a recent graduate of Falmouth University now working as a freelance illustrator just outside London. Her work demonstrates her passion for travel and the ability to capture the cultural identity of destinations. Since graduating in July 2019 she has worked on a variety of projects with Hemispheres, N by Norwegian and St Michael's Mount, among others. 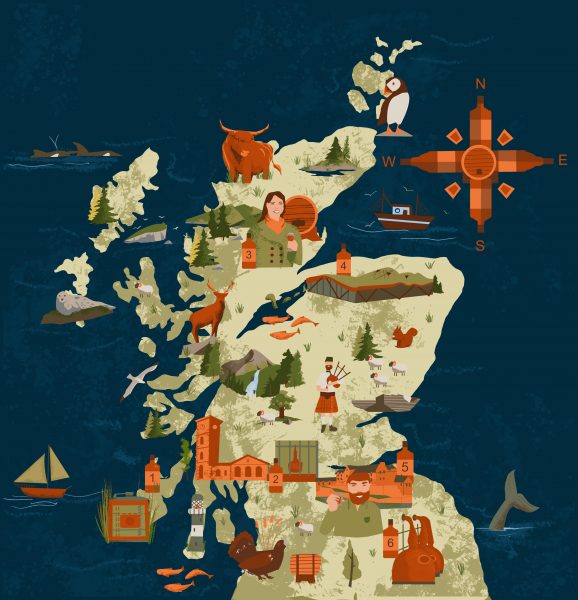