Usage: I created a main graphic (detailed vector illustration) that is used in various ways throughout the winter campaign for Lotte World Mall in Seoul, Korea. This includes: a 27 meter high illustration outside out of the mall. Lots of graphic applications in the mall like banners and window graphics. But also an 80 second animation, various 3 dimensional window displays and one big 3 dimensional display in the Centre of the shopping mall. vimeo.com/201077634 https://vimeo.com/201077172

Process: I created lots of sketches with pencil on paper, scanned this into the computer and created a large and detailed illustration that the agency (TIST Agency from Seoul) could use to create all material for the campaign

Materials: I used pencil, photoshop and mainly illustrator to create my illustration. TIST agency used all kinds of other programs and materials to create the actual campaign in Seoul, like 3d software, large printers and sculptors worked with wood and foam to create the displays

Formats: I created a large vector file for the agency to work with. The agency created all kind of elements for the campaign including vinyl window signage, 3d sculptures made out of wood and foam, but also lots of decoration like christmas baubles and there is also a 80 second animation

Brief Requirements: Create a winter campaign illustration for the Lotte World Mall, the biggest shopping mall in Korea. The illustration has to work as a strong image on its own so it can be used a 27 meter tall windowgraphic on the outside main entrance but also serve as a base for all campaign outlets including 3D window decorations, installations, banners etc. The image should be magical, full of witty details and communicate a global overall festive wintery feeling that speaks to not only the Korean shoppers but to all nationalities and ages

Key Brief Ideas: Since the project needed to appeal to all nationalities and ages, i started collecting as many information about different ways of celebrating winter. I really liked the magical feeling that the cold does to you, and especially they way people react to this state of the environment. When temperatures drop, people are creating warmth by loving, celebrating and various traditions. I wanted to combine those 2 aspects of winter, seasons outside cold and people's warm feelings, into one big eclectic mix. So I started mixing and matching various wintery details from all over the world into new items and arrange them into a fun composition. Now the image has the right holiday kind of vibe but when you look closer it is not a cliche of typical christmas stuff or asian traditions. 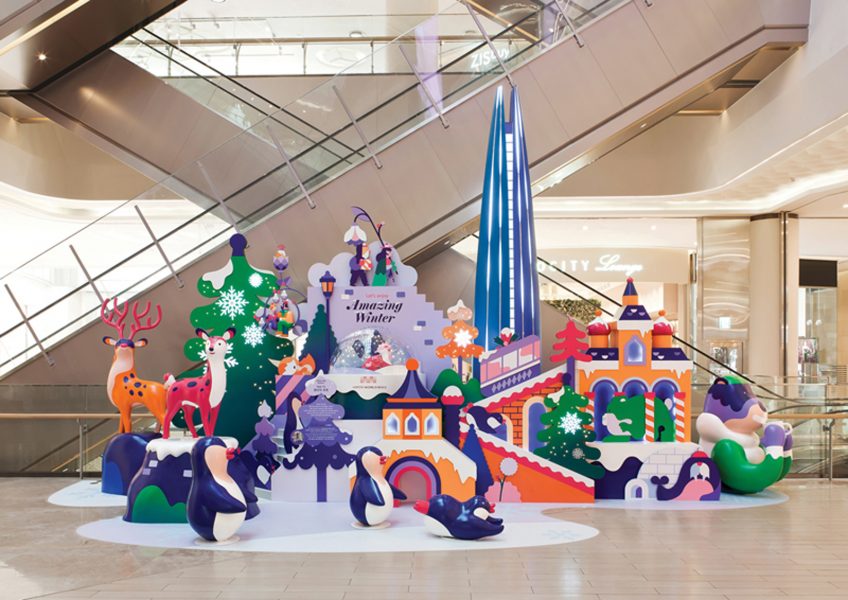