Why did you make this work:
Morrissey portrait commissioned by RollingStone-Magazine for review of his record "California Son", a collection of cover-songs. The illustration shows young Morrissey in front of a record-store window watching the records of his favorite musicians.

How was the illustration used:
RollingStone-Magazine used it for review of the record "California Son" by Morrissey

How did you make this work:
analogue brush-pen drawing and coloring in PhotoShop

Biography:
Lars Henkel ( born in Rome 1973) studied illustration at the University Aachen and at the Academy of Media Arts Cologne, Germany. Today he lives in Berlin. His work appears in magazines, books and CDs and has received honors from the ADC, SOI, AI, CA and 3×3. 2015 he received the „Hans Meid-Award“. He was commissioned by clients like GEO, Universal Records, Ride Snowboards or Gestalten Verlag. 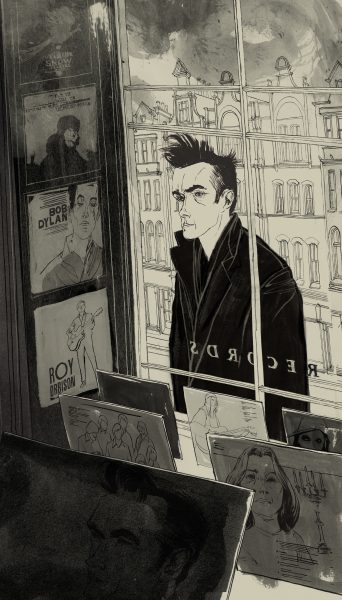