Usage: The illustration was created for the cover art and CD design of a music album.  (The commission was aborted by the client in its early stages but I proceeded to complete it nonetheless because I was seduced by the concept).

Process: After analysing the brief I proceeded to the idea generation and sketching stage. Once I had established a clear concept on my sketchbook, I sought some reference material to inform my realistic rendering. For instance the stylised female figure is based on an art model whom I photographed in the appropriate pose and lighting. The consequent digital collage helped me to create the illustration in oil paint on a wooden board using traditional fine art techniques. On completion, the painting was photographed and digitally retouched with a graphics tablet.

Materials: Oil paint (on a primed, wooden, circular panel having a diameter of 85cm) and Photoshop

Formats: The illustration exists as an oil painting (on a primed, wooden, circular panel having a diameter of 85cm). It also exists as a printed CD cover artwork and as a printed version on the CD itself.

Brief Requirements: Create a powerful image that conveys the album’s theme – focusing on the distant relationship between a hopeful, naive male character and an apparently vulnerable yet deceitful femme fatale figure.

Key Brief Ideas: I responded to the rather ambitious brief by accentuating the detachment of the protagonists from each other and staging them in two separate yet slightly overlapping worlds. The top world features an unidentifiable male figure wandering through a misty forest. However, unlike the viewer, he is unaware that the rock he’s standing on is actually the knee of the giant female figure inhabiting the world below. Despite the fact that he appears to be in a dominant position and that the lonely female figure is in a vulnerable pose, this tense interaction has all the characteristics of a malicious trap and appears to be the prelude to his demise.  The title is a clear reference to John Keats' ballad bearing the same name and which also features an enigmatic love story. The choice to opt for surreal imagery was intended to deliver the ambiguity of the situation in a more dramatic manner and the colour scheme chosen is meant to highlight the disparity of the two worlds. Additionally, the circular framing helps complement the composition of the illustration whilst fitting the CD format. 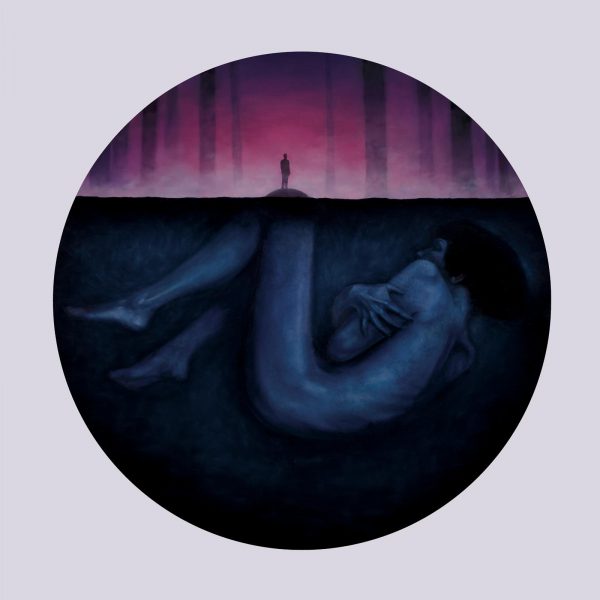