Why did you make this work:
It's very hard for me to explain the reason why I have made this illustration because it has spontaneously sparked from an idea and I just felt compelled to draw it. I then realised that the image has a 'narrative' feel.

How was the illustration used:
Being it a spontaneous work, this image was born without a particular use in mind. Beyond being a portfolio piece, I see it as a cover for a new graphic novel project.

How did you make this work:
This is a mixed-media work made with an isograph-type of pen and liquid ink on cold-pressed 300gsm paper. I then scanned it and digitally added two very soft layers to colour the background and the characters. The small dot on the shoulder blade of the woman at the center of the image was originally an ink stain, which I decided to keep turning it into a birthmark in the digitalised version.

Biography:
Isabella Thermes is an Italian who lived and worked in the US and London before moving to Berlin in order to pursue a career as illustrator and graphic novelist. She has held exhibitions and worked on private and commercial commissions. Her first graphic novel, 'The Human Heart' is currently under submission. Her illustration style is built on creating vector images with an emphasis on colours and patterns and hand-drawn illustrations using a Rotring isograph pen and a limited palette of liquid inks: black, red and greys. The accent is on precise, clean drawing. Her work is often digitally manipulated and reworked as mixed-media. 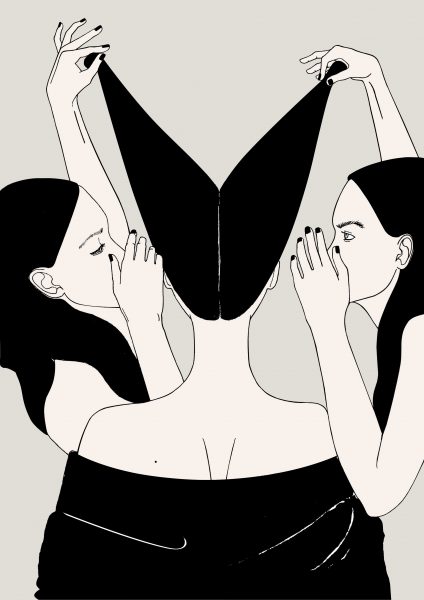