Awards / World Illustration Awards 2023 / 2017 / Shortlist / Into the Underworld: The Architecture of Katabasis
Next Previous Back to Awards List

Usage: The research project was instigated by and published in an architectural thesis. The work is to be published for the Journal of New Zealand speleologists and used for archival maps of the caves for the city of Auckland.

Process: 'Into the Underworld' follows a year-long process that began with approaching community members that were known to harbour grottoes and caves in their backyards. A dialogue ensued with the landowners and months later a site of study was agreed upon in the inner volcanic suburb of Three Kings. Employing a LiDAR machine from the Department of Anthropology and guided by speleologist Peter Crossley, the artist spent 3 days mapping the alien topography of a large 180-metre subterranean cave. Evidence of this process persists through to the final images' bright clusters throughout the plan drawing track the 18 stations where the scanner was placed throughout the survey.  The project then became acutely tied to the digital realm, where the cave data was brought into a 3D modelling software and an architectural intervention could be designed to the specific topography of the site.  Images of the cave and designed intervention were carefully rendered in this software and brought into Photoshop, before being overlayed and edited. For example, a watercolour backdrop was uploaded and placed behind a negative image of the original to bring the cave forward. Linework was added in Illustrator to colorize the images, highlighting the ‘gold’ section of the construction against the raw landscape and giving full depth to the image. More than a hundred thousand LiDAR points generate the cave section in each image.

Formats: The work has been printed on archival photo paper of various sizes ranging from 250mm x 250mm to rolls up to 8000mm long and 2000mm high. The digital files also exist in a range of formats – static images, 3D models, raw point clouds and also 3D-printed cross-sections that allowed design investigations specific to the cave topography.

Brief Requirements: While the volcanic lava caves underneath Auckland city have been on the verge of becoming part of a UNESCO World Heritage Site, they have been treated to the worst of urban neglect by the expanding city; dumped with rubbish, punctured with stormwater pipes or filled with concrete as a matter of inconvenience to some of the developers above. No sites on the mainland are publicly accessible, and it is not common knowledge that they even exist. The brief called to evoke the sublimity of what is typically 'the grotesque subterranean' and bring these hidden sites to light in the public realm. As they remain inaccessible to large numbers, the intention was to employ some form of creative art to re-present the caves and incite a visual connection for the masses.

Key Brief Ideas: The work illustrates the katabasis of Stewart's Cave, imagined through a sequential narrative. As an architectural graduate, I wanted to explore the role of architecture beyond the conventional and allow the viewer to discover further meaning in the drawing. As the timber formwork contracts, dilates, bows and flattens, it not only acts as a vessel for exploration, but also celebrates the tumultuous formation of the fossilised lava flows.  While modelled in 3D, the cross-section emerged as the most vindicating peruse into the environment, revealing the intricate geological formations and relaxed native tree roots from the ceiling. Human figures were laser scanned and overlayed to provide a sense of scale and suggest a relation to the section – in some scenes to highlight the tactile demands of navigating a landscape that is absent of the worldly senses of light and sound.

College: The University of Auckland 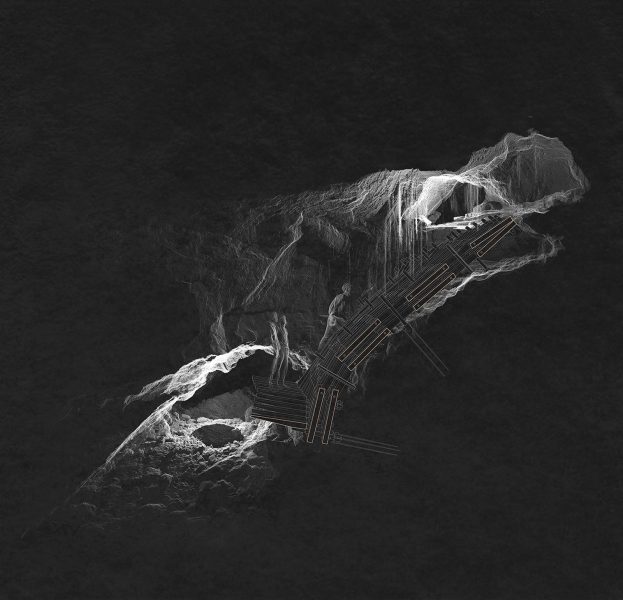