Process: Pen and pencil drawing scanned into digital files then edited on photoshop.

Formats: drawn onto architectural tracing paper with pen and pencil.

Brief Requirements: Propaganda press based in Korea has re-edited and published Denis Diderot's Cyclopaedia which was originally published in France in the 18th Century. This project mainly focuses on the illustrations the cyclopedia used. The press commissioned me to create a poster to promote this project.

Key Brief Ideas: My idea was to reflect the modernisation of my own country. I want my audience to look back at our own modernisation from the viewpoint of the European who created the Encyclopaedia. Korean industrializaton happened in the 20th Century and it was heavily driven by foreign force and a dictator, the father of our current president who is being charged with corruption. A steam locomotive nicknamed 'Mogul1' built by the Japanese was the start of the industrialization. Shipbuilding and car manufacturing were the key leading businesses that came right afterwards which are still continuing. Concrete, steel and the dictatorship were the central ingredients of all this transformation which became the symbolic image of the industrialization of Korea. Korea may look modern but it's only on the surface. I wanted to look directly what's on the surface from the modernist's point of view and confront what we've done so far. I believed that its the essential procedure to start genuine modernization eventually and a good way to mark the republication of the French encyclopaedia in Korea in 2017.

Commissioned For: A poster for Cyclopaedia republication project 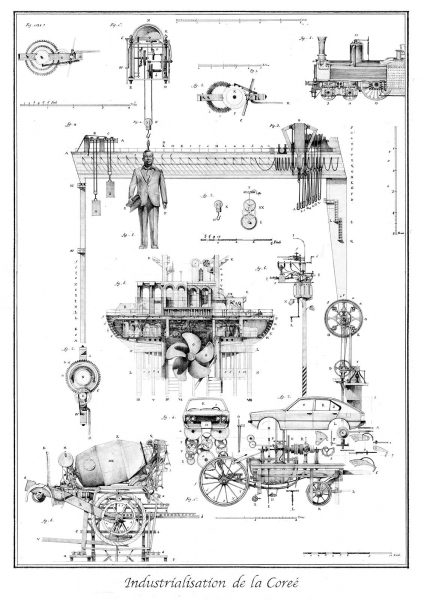