Process: Children in treatment at the hospital worked with us to create character designs using cut paper shapes, then pen drawings.  Following this, we developed work based on these drawings to illustrate the characters hiding in various locations around the ward, so that families could search for them during their time at the hospital.

Materials: Character designs made by children in treatment at the hospital, using cut paper collage, and pen drawings.  Our illustrations based on these designs were produced from pencil sketches, redrawn in Adobe Illustrator.  Final mural artwork was digitally printed onto adhesive vinyl, and applied to walls throughout the ward.

Formats: The illustrations were produced using Adobe Illustrator, and now exist as vinyl wall graphics, and some framed prints, installed throughout the ward.  In addition to this, we produced a colouring/activity book to accompany the mural, more information on this here pencilandhelp.co.uk/activity-book

Brief Requirements: Produce a mural artwork extending throughout the Medical Daycare Ward, that offers a coherent narrative/ design and a distraction for patients and their families who are often in treatment for hours at a time.

Key Brief Ideas: The built environment of the ward had been adapted several times over the years, resulting in a fragmented interior without much clear wallspace.  We responded to this by creating an illustrated narrative that interacts with the building.  We worked with children in treatment at the ward to create a group of characters that are engaged in a game of Hide & Seek, squeezing behind doors and bins and drawers.  Patients and families can join in with this game by searching for specific characters through the ward.  In addition to the mural, we produced a colouring activity book to support and extend this engagement, more information on this on our website pencilandhelp.co.uk/activity-book 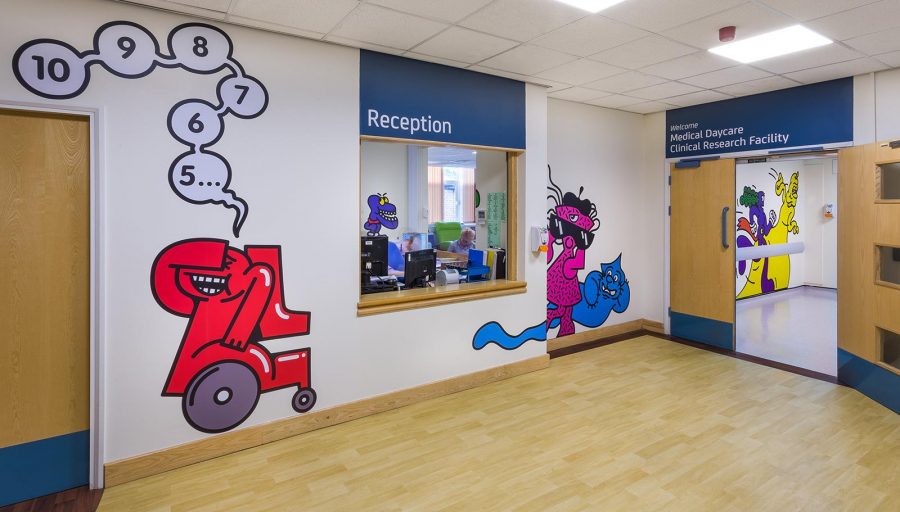