Usage: One of a series of images produced for the exhibition ‘Expectations of the Past’ and the Artist’s book that accompanied it, supported by Arts Council Funding.

Process: Sketchbook and large on-site drawings/paintings acted as a starting point for further investigation in the print/studio. These acted as fundamental elements, which were combined digitally and eventually printed as large format works.

Formats: At first I drew in sketchbooks but as time progressed I moved on to larger sheets of paper and pots of paint, from twigs and grasses to small branches as well as larger decorating brushes. These large drawings and sketchbooks acted as the starting point for digital works but were also exhibited in their own right.

Brief Requirements: Images would be an investigative journey of memory, identity and loss informed by Dickens’ novel ‘Great Expectations’ and my poetry, which examine these shared themes. Authenticity was key, the foundation for these works would be location drawing produced at specific sites referenced in both texts.

Key Brief Ideas: A combination of traditional and digital media would be used to reflect the dialogue between the past and present in the poems.   Elements from both texts should meet and converse, to create an emotional landscape as well as a physical one. Where the real memories and  fictional narratives that co-exist in these parallel landscapes converge. Location drawings should not just be a response to the place they would be bound up with it, as at each site I would use what was around me to draw with, such as grasses and seed-pods. This would be a vital part of the process to capture the magical quality  and access the ‘memory’ of each specific location. 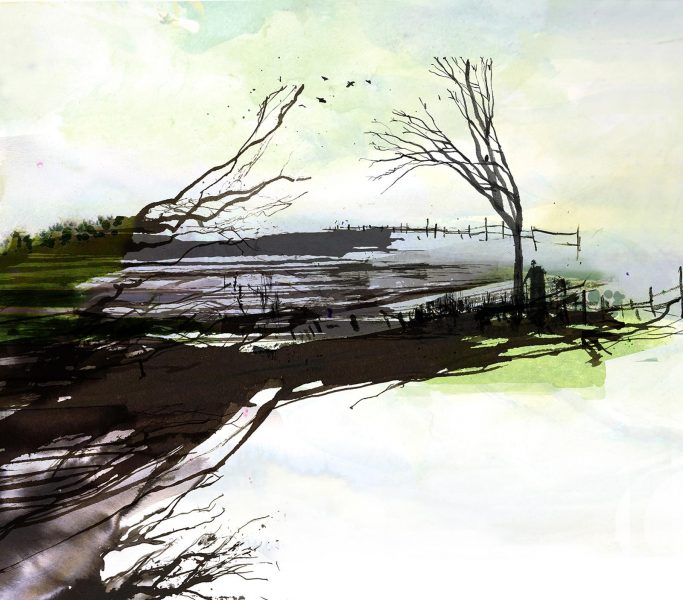