Why did you make this work:
The illustration was commissioned by Cointreau and BCN Més - a Barcelona local independent magazine - to celebrate the first-ever edition of the editorial contest ‘Arroz Negro’ sponsored by Cointreau. The brief was to represent one of the Cointreau signature cocktails: the Margarita.

How was the illustration used:
The artwork is part of a series of four illustrations commissioned to different artists and representing some of the most famous cocktails where Cointreau is the protagonist. The Margarita piece was used as a full spread of the BCN Més, December 2019 edition.

How did you make this work:
The inspiration came directly from the cocktail's origins. As the story goes, the cocktail was born in 1948 by Margaret Sames, a wealthy Dallas socialite. Margarita created this refreshing alcoholic mix during a pool party at her holiday house in Acapulco to entertain the guests with her creativity and pizzazz. The illustration, with its vintage nuances, wants to recreate the vibes of that story.

Biography:
Erika Rossi is an Italian artist and designer based in Barcelona. Her primary work playground is digital but she also enjoys applying her art to other creative territories such as physical spaces, textile, and toy design. Her minimal and colorful style consists of bold and flat shapes that often carry a hidden message. Erika's clients include Volkswagen, Cointreau, Virgin Money, among others. 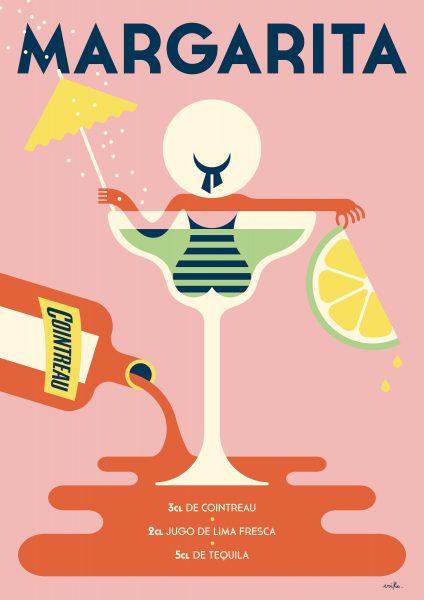