Why did you make this work:
I had to make the cover of Ilustríssima, a cultural section of Folha de S. Paulo newspaper.The illustration should be based in an article about the book The Narrow Corridor, not yet released in Brazil, but trendy in the academic world. The narrow corridor is one in which nations enter with a balance between the powers of the State and society, an ideal situation for development.

How did you make this work:
I conceived two arms - democracy and dictatorship - pointing in different directions, crossed by lines of graphs that suggest divergent economic situations. This crossing generates tension and highlights the opposition between democracy / dictatorship and also the questioning of the text.I played with digital textures as small elements related to dictatorship and democracy.


Biography:
Daniel Bueno is an illustrator, graphic artist and comics artist from Sao Paulo. He graduated in Architecture and Urbanism from the University of S. Paulo in 2001. Bueno has contributed to more than fifty magazines and newspapers. He got several prizes in Brazil and other countries, as two Bronze prizes in 3x3 Annual (USA), four HQ Mix (Brazil) and three Jabuti prizes (Brazil). In 2011 the book "My cousin's corner window/ A janela de esquina do meu primo", illustrated by Bueno, got honour mention in the Bologna Children's Book Fair (2011). He also integrates the illustration colective Charivari, that launched thirteen editions and many experimental fanzines. In 2007 he concluded his thesis about Saul Steinberg in the University of São Paulo. He teaches at EBAC - British School of Creative Arts since 2016. In 2020 his work was highlighted in the American illustration magazine 3x3, edition 23. 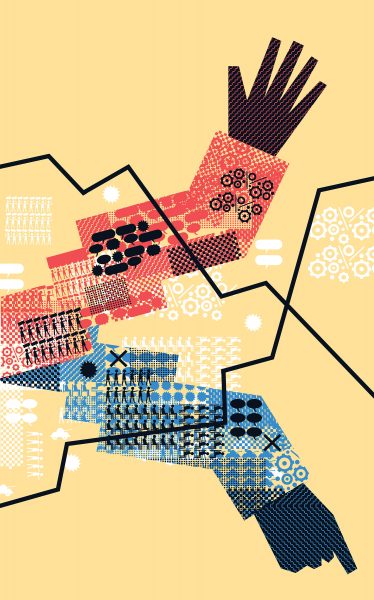